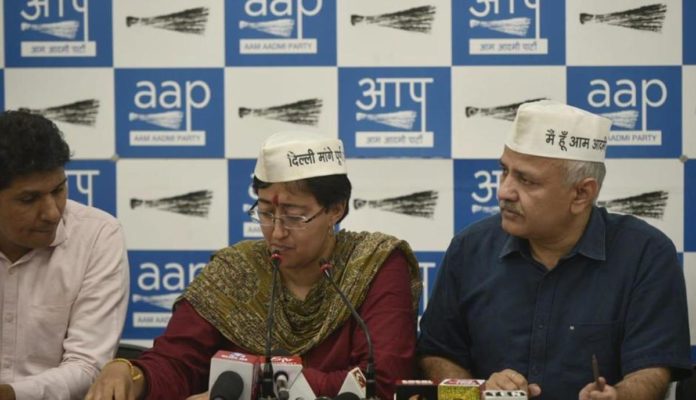 Aam Aadmi Party (AAP) candidate from East Delhi, Atishi broke down at a press conference today as her party accused her BJP rival Gautam Gambhir of circulating a derogatory, offensive pamphlet on her ahead of voting in Delhi on Sunday for the national election. Atishi blamed cricketer turned leader Gautam Gambhir for the circulation of the pamphlet in East Delhi.

Never imagined Gautam Gambhir to stoop so low. How can women expect safety if people wid such mentality are voted in?

Atishi, stay strong. I can imagine how difficult it must be for u. It is precisely this kind of forces we have to fight against. https://t.co/vcYObWNK6y

Gautam Gambhir, a celebrated former cricketer, rubbished the allegation in a series of tweets implying that AAP had concocted the allegations to win and declaring that he was “ashamed” to have a Chief Minister like Arvind Kejriwal.

I feel ashamed to have a CM like @ArvindKejriwal

I abhor your act of outraging a woman’s modesty @ArvindKejriwal and that too your own colleague. And all this for winning elections? U r filth Mr CM and someone needs ur very own झाड़ू to clean ur dirty mind.

As a challenge, he said if AAP proved its accusation, he would opt out of the election.

My Challenge no.2 @ArvindKejriwal @AtishiAAP
I declare that if its proven that I did it, I will withdraw my candidature right now. If not, will u quit politics?

Atishi’s objection on Gautam Gambhir is not new

AAP candidate Atishi had earlier raised objections to Gautam Gambhir’s candidature and complained to the Election Commission that he had voter ID cards from two assembly constituencies.

However, the complaint had been rejected but the woman leader of Aam Aadmi Party is back with another friction on which the cricketer openly challenges Kejriwal’s party.

Further, the BJP’s Mamta Kale said, “Absolutely baseless charges have been leveled against Gautam Gambhir by AAP. AAP has a history of lying and politicizing things.”

Read more: Here’s what Amit Shah has to say on PM Modi’s campaigns…