The Congress party finally put a full stop to the speculation of Priyanka Gandhi’s contest against Narendra Modi from Varanasi. These speculations have been building since her entry to active politics in February. Surprisingly, Congress fielded its 2014 candidate Ajai Rai against PM Modi. The party’s announcement came hours before PM Modi was to hold a mega roadshow in Varanasi and file his nomination today to seek a second term as a lawmaker.

On the other hand, Union Minister Arun Jaitley on Thursday blogged out a takedown of Priyanka Gandhi Vadra after the Congress ended speculation about her candidature from Varanasi, fielding its 2014 candidate Ajai Rai against Prime Minister Narendra Modi.

“I am deeply disappointed with the Congress Party’s decision of not fielding Priyanka Gandhi from Varanasi,” Mr. Jaitley wrote in a blog titled “Refuge in Wayanad and a Refuge Away From Varanasi – The Story of a Family Dynasty”.

Over the last weeks, it had soared, with broad hints from Priyanka Gandhi and approval of “suspense” from her brother, Congress chief Rahul Gandhi.

Sources said Rahul Gandhi, Sonia Gandhi and most senior leaders were against the idea of Priyanka Gandhi Vadra taking on PM Modi in what would have been her maiden election. Sources also said Priyanka Gandhi did not finally agree to take the plunge.

“The last two months that she has been in the public life has driven home the point – “India has changed, dynasties don’t matter”. The myths of Priyanka Gandhi stand eroded,” the minister wrote.

“I had only hoped that Varanasi will give the new India an opportunity to decide the fate of a tried, tested and successful leader as against a new political dynast,” Jaitley wrote.
“Just repeating the same five sentences several times a day and not getting out of the obsession of ‘Hamara Parivar’ does not impress ‘New India’ anymore. I am sad that new India has been denied the opportunity to establish that it does not accept inexperienced dynasts with no other credentials,” he added.

The full blog is written by Jaitley- 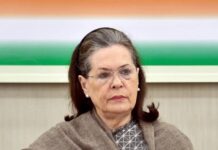