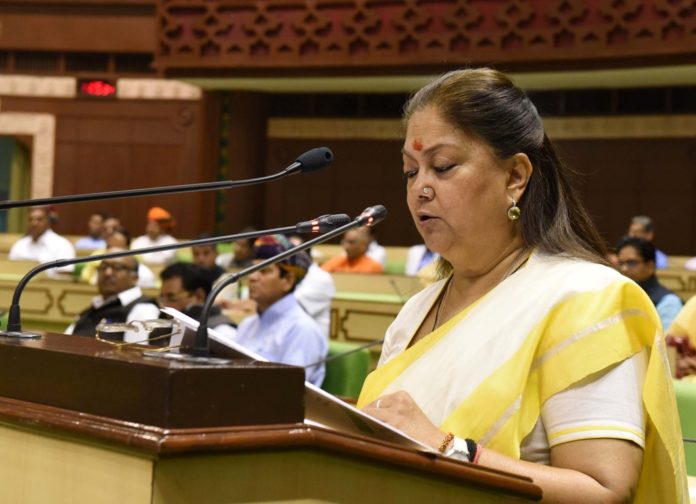 Rajasthan budget 2017-18 is the most well balanced and dynamic budget Rajasthan has come across. We can’t deny the fact that, CM Vasundhara Raje has tried to surface the development for the state in the most managed way possible. But, amidst all this, temper tantrums from opposition is a common thing see. This time, it got intense when the non-ruling parties scrapped all attempts made by the state government and termed it as a heavy splurge of money.

Without looking back to the dearth times, Rameshwar Dudi blamed about the lower revenue collection by the ruling government.

To this, state CM Vasundhara Raje made her replies centered on the prominent state developments.

Despite of just making hollow statements, CM Raje talked on numbers and manifested the growth figures in her tenure.

While the progress was quite apparent from these figures, CM Raje also highlighted that they have worked towards maintaining the “self-respect” of the state.

Speaking on the budget allocation, CM Raje pointed with the help of figures that, budget have covered all possible aspects in true terms and not just have given sweet bait to potential voters.

The improved facet of highways is one considerable thing in the state development. CM Raje highlighted her nature of work by saying that, unlike opposition, they have focused on family like development of Rajasthan. Congress made fake promises in its tenure which not the work culture of BJP Rajasthan.

Again, how can we forget the great dearth of DISCOMs, which was dealt by Raje government.

On top of this, CM Raje put an important question asking that, “Where did all the money earned by previous govt. go?”

These are some important highlights from the quarrels of both the parties. But, if we be true to ourselves, this time Congress has very less cards to reveal in this game of developing Rajasthan.