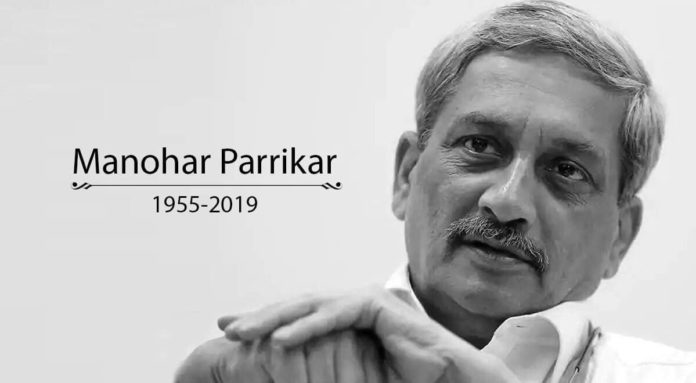 Goa chief minister Manohar Parrikar, a former defense minister who had been battling a pancreatic ailment for over a year, died at his private residence on Sunday. He was 63. The chief minister died around 6.40 pm on Sunday,” said a senior state government official.

Sources said Parrikar was put on life support system late Saturday night. A widower, Parrikar is survived by his two sons and their families. The central government announced national mourning on Monday.

Modi condoled the death of Parrikar, hailing him as an “unparalleled leader”.

A true patriot and exceptional administrator, he was admired by all. His impeccable service to the nation will be remembered by generations.

Deeply saddened by his demise. Condolences to his family and supporters.

Saddened to know about the demise of senior BJP leader Shri Manohar Parrikar ji, Chief Minister of Goa. He always led by example in his public life & was loved by masses. He will be missed by everyone of us. May God render peace to the departed soul. Om Shanti ॐ शान्ति

Parrikar ji has shown the entire nation how a BJP Karyakarta, even during his toughest time, is committed to the philosophy of Nation First, Party Next and Self Last.

He will always be remembered for his contributions as India’s Defence Minister and as CM of Goa. pic.twitter.com/jiKNGoOZrj

Extremely sorry to hear of the passing of Shri Manohar Parrikar, Chief Minister of Goa, after an illness borne with fortitude and dignity. An epitome of integrity and dedication in public life, his service to the people of Goa and of India will not be forgotten #PresidentKovind

Anguished by the news of Shri #ManoharParikkar Ji’s untimely demise. He was the epitome of integrity and honesty, having served the people of Goa with dedication and commitment that will inspire generations to come.

The health of Manohar Parrikar, a technocrat-turned-politician and BJP stalwart, took a turn for the worse in the past two days after his medical condition fluctuated for over a year. The four-term chief minister was flown to the US for treatment in March last year.

Parrikar was a leader who enjoyed acceptance from all sections of the BJP and beyond. He played a key role in making the BJP a force to reckon with in Goa, which remained for long a Congress bastion, with regional outfits having pockets of influence.

Despite his failing health, Parrikar had presented two state budgets in 2018 and 2019 and had attended public functions, including the inauguration of an iconic bridge across River Mandovi. Parrikar was reportedly discussing work even before 2 hrs to his untimely demise.

Salaries in India may hike by an average 9.4% next year : Survey