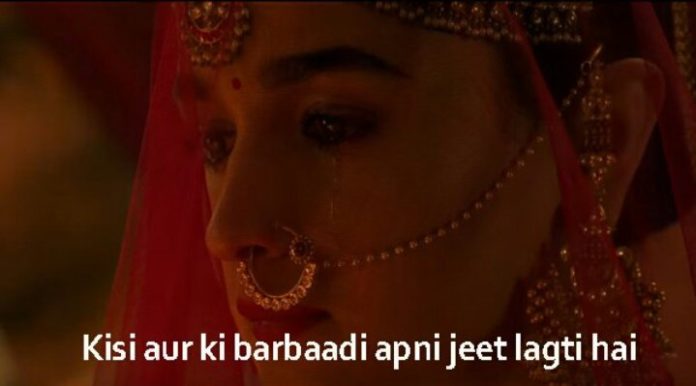 Karan Johar, Alia Bhatt, Varun Dhawan, Sanjay Dutt, Madhuri Dixit, Sonakshi Sinha, and Aditya Roy Kapoor released the teaser of their upcoming periodic drama, Kalank on Tuesday.
The teaser introduces all the characters in the film, hinting at a love tragedy between the characters of Alia Bhatt, Aditya Roy Kapur, Sonakshi, and Varun Dhawan.
But apart from the grandiosity of the teaser and the mesmerizing sets, it’s the memes that have captured the Internet’s attention. And they will definitely leave you in splits.
From comparing the film’s poster to WWE to making fun of the now infamous “Humse zyada barbaad aur koi nahi is duniya mein”, Twitter went all out with the memes and they are even better than the teaser itself.

#KalankTeaser
When you are from general category and also bad at studies. pic.twitter.com/6kZcbKlNBF

#KalankTeaser Please try to adopt something new or else leave recreating of movies together 🙏🙏 pic.twitter.com/TQADpBBnJM

Karan Johar after every episode of Koffee with Karan. #KalankTeaser pic.twitter.com/Pe981jbh4T

Directed by Abhishek Varman and produced under Karan Johar’s banner Dharma Productions, Kalank is a story of turbulent relationships and eternal love, set in the 1940s. Kalank will release on April 17, 2019.