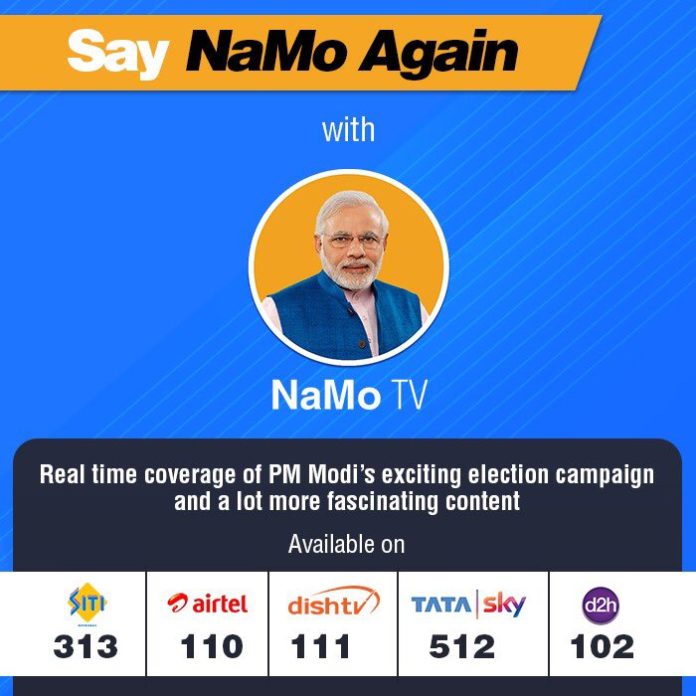 With the nation fully in the grip of the Lok Sabha poll campaign, the Content TV/NaMo TV, launched on March 31, features PM Modi and his speeches besides strong BJP-centric content. The BJP social media handles have been tweeting asking viewers to tune in to ‘NaMo TV’ and NaMo app for the PM’s rallies and speeches.

The move to broadcast NaMo TV through DTH platforms was taken by the party as it was felt that this would help enable the BJP to reach out to more people across the country. This is also expected to compensate for the lack of availability of national broadcaster, Doordarshan, for the live broadcast of all of Modi’s rallies.

Sources stated that due to the Election Commission of India’s model code of conduct for the general election in place the public service broadcaster cannot telecast all events being attended or addressed by Modi.

NaMo TV is a channel which is dedicated to the live telecast of political rallies and speeches of Prime Minister Narendra Modi. The channel also streams compilations of Modi’s speeches in the Parliament. Interestingly, broadcasts of Modi’s interaction with BJP party workers is also a regular feature.

The YouTube channel also acts as an archive for all such material related to him. BJP’s campaigns for the 2019 Lok Sabha polls like #Namumkinabmumkinhai and #Mainbhichowkidar are prominently featured on the channel.

While the channel has over two million subscribers on YouTube sources stated that once it begins to broadcast across all DTH platforms the reach of this channel would grow multifold.