Rajasthan is famous for its rich cultural heritage and high traditional values. People of Rajasthan are spiritual and have the utmost faith in God. It’s not only about Rajasthan rather the whole country is known for its spirituality and divine past. The ancient Rajasthan was a hub of sacred Vedas and people from all over the world used to come here to witness this metaphysical state where mind meets soul and people devote themselves to the supreme power.

The state of Rajasthan has always been a part of the glorified history of India and been the birth of many renowned gurus and learned individuals. The Chief Minister of Rajasthan Smt. Vasundhara Raje also has a spiritual personality. She is very religious and respects all. Only a few people know it but Vasundhara Raje starts her with a pooja and is a follower of God with a true heart. She also meditates to focuses all her energy to dedicate it towards the welfare of people. She has a deep faith in Vedas and therefore, under her guidance, Jaipur is hosting the first of its kind, International Vedic Conference in the state for a planned recital of Shri Suktam by almost 5,100 youths, worship of 108 women as “manifestations of shakti”, where various scholars are scheduled to present research papers on topics such as ‘concept of Rashtra Shakti in Vedas’. The event was attended by Chief Minister Vasundhara Raje along with the gracious presence of various ministers, independent scholars, writers, journalists, media persons, artists and others interested in Indic/Vedic Studies on the morning of September 9th, 2016. It is a three-day event being organized in the Pink City of the state of Rajasthan.

CM Raje was very excited to become a part of the event and said, “I am honored to be a part of such devotional and spiritual event which has imparted me with lots of positivity. Such events should be organized in every state and country as it is every necessary for each one of us to connect to our roots.” She added, “All the renowned scholars, writers, artists and others, who are attending this event will get inspired from it and it would create their interest in Indic/Vedic Studies. The events like this should be organized more often as people of Rajasthan will get to know and meet the rich history and ancient values of our Vedas. It will educate people about our ancient language Sanskrit and promote its knowledge.” 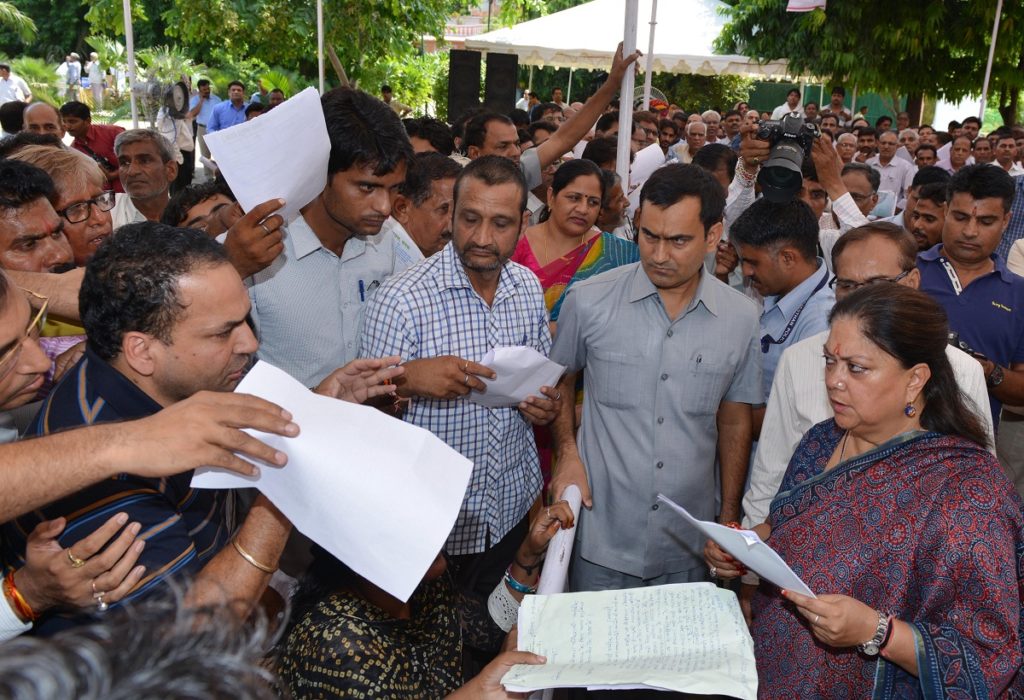 With the passage of time, people are forgetting their moral values and who they actually are. The significance of Sanskrit is known to our elders but the young generation is not aware of it. So, CM Raje has congratulated the organizers of the event with an open heart and asked them to move forward in this direction as they have the full support of Government of Rajasthan.

Raje also said, “The 5100 young scholars who are present here will surely bring a positive change in the society and will save the ancient language of Sanskrit alive for the coming generations.”

In the event, she also raised the issue of “Gau Mata” and appealed people to take care of the cows which have a vital religious significance. She added, “Gau Mata is not a political agenda and people should not use it to gain any sort of political advantage. The issue is related to our religious sentiments and cow deaths should not be politicized. I appeal to all those who have Cows at their homes that you should not abandon them after they age. It would be very selfish for us to leave cows after they stop providing us milk and leave them stranded on the streets. And if you are doing it, it is very shameful and hatred sin. Mother Cow is our domestic animal from centuries and we should take their responsibility to feed and maintain them even after they are of no use to us.”

She added, “People use plastic bags and then throw them on the street. It is totally unacceptable as our cows eat them and get poised with it. They die because of eating plastic so each and everyone should take an oath to not touch plastic bags for not only the safety of environment but also our Gau Mata.”

The people who were present in the event were totally agreed by what CM said and assured her of taking care of our sacred bovines.

“Together, we can join hands and move towards a booming and flourishing Rajasthan to make a better India. Rajasthan has all the potential to become the best state in the world,” she concluded.

Her speech ended with a call to every man to respect the women as we can only create a better society when the females feel safe and comfortable. Then only, the state of Rajasthan can grow and progress in a true sense.