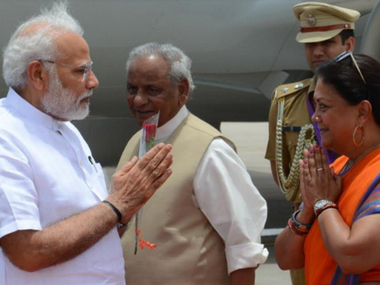 Today, PM Narendra Modi has come to Jaipur, Rajasthan. This visit is quite significant for BJP as it PM launched the Bharatiya Janata Party’s (BJP’s) campaign for the upcoming Rajasthan assembly elections with a rally. The rally has witnessed a huge gathering of beneficiaries of various welfare schemes by Central as well as the State Government. Beneficiaries of every scheme are taking part in the rally. The various schemes stated by BJP government have benefitted a large no. of people and still bringing benefits to the lives of the people. Check out these significant schemes by Central government progressing well in Rajasthan.

To resolve the water issues in Rajasthan, this ambitious scheme was launched. This scheme is meant to ensure effective implementation of water harvesting and water conservation related activities in the rural areas. It also aimed to make every village water self-reliant and to increase productivity of land. This scheme will cover the issues related to water conservation like rainfall, runoff, ground water and soil moisture. Till now, three phases of the schemes held, covering 12056 villages. In the first phase, it covered 3529 villages, in second 4213 villages and in the third, 4314 villages have been covered. For the scheme, ₹ 4148 crore have been spent.

Palanhar Yojana
This has also emerged as one of the amazing schemes of the government for orphans. Later, the scheme is extended to benefit the kids whose parents are not able to raise them due to certain reasons. But, the kid is required to stay with the guardian instead of staying in orphanage. Under the scheme, the expenses of raising an orphan are borne by government. To avail the scheme, the guardian’s yearly income should not exceed ₹ 120000. This scheme has provided benefits to 2.35 lac people.

Bhamashah Swasthya Bima Yojana
This scheme aims at offering IPD patients with access to cashless facility. In this, insurance is given to reduce the financial risk of surplus expenditure on healthcare. It covers government as well as few private hospitals. By availing this scheme, the poor people of the state can now get medical treatment in the best hospitals. The patient gets expenses for general illness, critical illness, pre-hospitalization expenses, post-hospitalization expenses and transportation expenses under the scheme. In this scheme, 506 government and 774 private hospitals have been covered. Under the yojana, 22 lac people have claimed ₹ 1500 crore till now.

Mukhyamantri Rajshree Yojana
This is another wonderful scheme by government for the girls of the state. It aims to make the girls self-dependent and help them to grow in their lives. This scheme also aims to reduce gender inequality and infant mortality rate. Under this scheme, the government provides ₹ 50000 scholarship on the birth of girl child for her education till class 12th. The amount is given in the installment. Under this scheme, the government has distributed ₹ 252 crore in first installment and ₹ 103 crore in second installment. Till now, 10 lac girls have taken benefit of this scheme.

Bhamashah Nirman Shramik Kalyan Yojana
This scheme covers the labours involved in construction work of homes and other buildings. The scheme is for the welfare of labour class and their families. It is an umbrella scheme that incorporates 4 schemes. Under these four schemes, scholarship to studying children of labour and ₹ 1.5 lac for accommodation are given. In this premium amount for their Bhamashah Swasthya Bima Yojana and other insurance schemes are borne by the government. In this yojana, 16.26 lac enrollments have been done and 3.60 lac people have taken benefit of the scheme. Government has spent ₹ 1000 crore on labour class.

Kaushal and Aajeevika Vikas Yojana
To fight the problem of unemployment in the state, the government has launched this scheme which has changed enormous lives. This scheme aims at making the youth self –dependent financially and expands the employment opportunities in the state. Under this scheme, 2.60 lac youth have been given training. More than 15 lac youth have been given opportunities for employment and business including 1.80 lac government jobs.

Deendayal Upadhyaya Varishth Tirth Yatra Yojana
This scheme is started with the aim to provide free pilgrimage to the senior citizens of the state. In this scheme, 23 major pilgrims of the country will be covered. In this, travelling to few pilgrims is done by train and few by air. Not only air fare but also their food and stay are taken care of by the state government. For those who cannot afford visiting pilgrims, this scheme is like a blessing. Till now, 40321 senior citizens have taken benefit of this scheme out of which 35143 travelled by train and 5178 by air.

To increase the number of girls in government schools, government has launched Medhavi Chatra Scooty Yojana. This scheme aims to motivate the girls’ students for regular study from class 9 to class 12 and getting 75% marks in 12th class. This scheme also aims at motivating girls for further studies.

These schemes came as a ray of hope in the lives of needy. It is due to efforts of Rajasthan CM Vasundhara Raje that state has so amazingly implemented these welfare schemes. Rajasthan government has made these schemes in education, health, agriculture, employment and many more areas for the welfare of citizens.