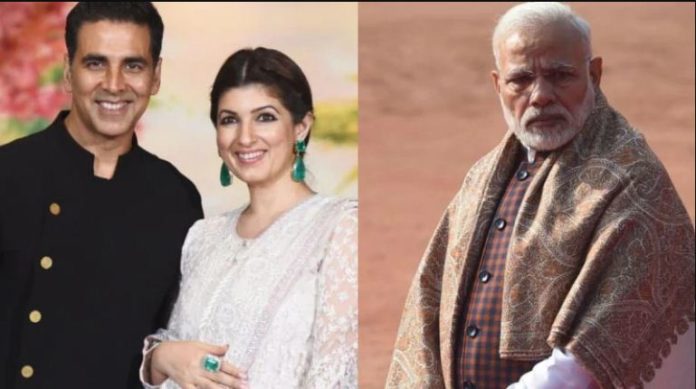 The actor, while interviewing the PM for ANI in the sprawling lawns of his residence yesterday, shared a few jokes on him that are circulated on social media.

Modi said he followed his Twitter feed and enjoyed the creativity as it gave him a perspective into the mindset of the common man. “I follow you (Akshay Kumar) and Twinkle Khanna Ji on Twitter. From the way she targets me, I understand there must be peace in your family life,” he said, much to the amusement of Kumar. “All her anger must have been spent on me, and so you must be feeling at peace,” he added.

Soon after the interview, Twinkle Khanna posted a reply on her twitter saying, “I have a rather positive way of looking at this – Not only is the Prime Minister aware that I exist but he actually reads my work.”

I have a rather positive way of looking at this-Not only is the Prime Minister aware that I exist but he actually reads my work 🙂 🙏 https://t.co/Pkk4tKEVHm

Modi, who visited his mother Heeraba on Tuesday before casting his vote in Ahmedabad, also revealed that it was difficult for him to find time for his family. “If I had left my home as Prime Minister, then I would have lived with my family. But I stopped living with them a long time ago and now this is my life. My own mother keeps asking me what can we talk about, it has also become difficult for me to find time for my family.”

Further, Bollywood star Akshay Kumar asked him what was the biggest asset he brought to PMO from Gujarat? PM Modi gives a very intriguing response to this question. PM said, “As a prime minister, what I have, other prime minister didn’t.”. Modi said that I was the longest serving chief minister of Gujrat and that gave me the experience to work keenly on every issue in the country.”