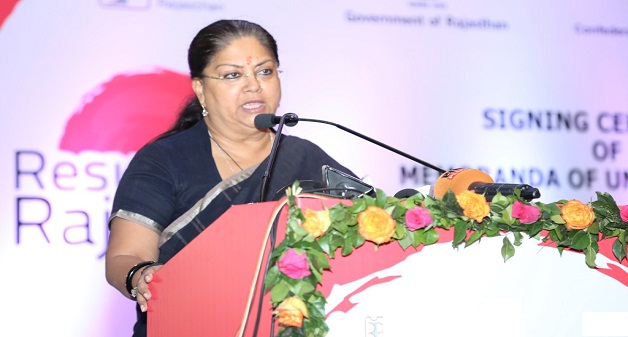 Vasundhara Raje’s reform project is the most impressive overhaul of obsolete laws and acts ever undertaken along with landmark policy transformations.

Rajasthan is the largest state of India – over the last two years, the State has completely overhauled itself under the leadership of its Chief Minister Vasundhara Raje with the vision of developing a strong services sector and enhancing ease of doing business, which has turned Rajasthan into an attractive destination for trade and investments.

Rajasthan has been a traditionally favored state for investments in sectors viz. cement, IT and ITeS, tourism, ceramics, automotive and agro-based industries, largely because of the accessibility of natural reserves and strategic positioning. After she came into power in December 2013, CM Vasundhara Raje recognized the tremendous opportunities that exist in the areas of infrastructure and agro developments, the enormous potential for electricity generation through renewable energy sources amongst other areas.

Recently, the Government of Rajasthan has brought about landmark amendments in labor laws intending to enhance the ease of doing business and to create more job opportunities in the business and industrial sector. Last year, the state assembly of Rajasthan with BJP in majority, voted to amend the Industrial Disputes Act of 1947 intended to give companies more flexibility in hiring and firing workers. Subsequently, changes to the law were approved by the President.

Many other laws were amended by Rajasthan including the Apprentices Act, the Factories Act and the Contract Labor Act. Overhauling and reforming labor laws at such comprehensive scale triggered a larger nationwide conversation on the issue of labor reforms, with national and state governments considering similar alterations. Lawmakers in Madhya Pradesh have already moved forward with a series of labor reforms very related to those ratified in Rajasthan. Policymakers in Haryana are debating, and the Union government just approved an amendment to the Apprentices Act that resembled that of Rajasthan.

Taking another revolutionary step forward towards improving ease of doing business and investment environment in the state, Rajasthan, heading under the vision of CM Vasundhara Raje, has become the first state to have effectively implemented online approvals for building plans along with obtaining of fire No-Objection certificate online, with the foresight of removing manual intervention.Application submission, processing, building plan approval and payment can now be done digitally. Fast-track procedure to get approval in a day shall be in place by first week of August. This effort follows the Government’s recent steps towards urban development through innovations such as laws for land pooling, titling and digitization of records.

This landmark legislation was passed by the Raje-led government in Rajasthan that shall lead to providing legal backing to land records, successfully ensuring land and property ownership. This shall create an effective and transparent modern land market, provide certainty of lease and end litigation that often slushes development projects. Once an individual is granted lawful rights to land or property that at present can be disputed or challenged, their ability to trade these rights shall improve radically. The initiatives of the State Govt for urban land reforms in terms of guaranteed land title act is widely being appreciated by all because of the long term impact in safeguarding property interest rights and transforming the issue of property rights completely.

Another reform project that the Chief Minister herself took up recently was exhaustive repealing of archaic laws and acts that have no meaning in today’s date and age. Rajasthan started the year 2015 with 592 legislative Acts; it will end this year with 279. Of the four segments of this project – repealing, consolidating, examining relevance and digitizing laws – the state completed repeal last year, finalized consolidation in May, and began putting laws online last month. The challenges were enormous and there were no lessons to learn from. 61 principal Acts and 187 amending Acts were identified and abolished through legislation in October 2015. The Rajasthan Laws Repealing Bill 2015 represented response from 66 departments over hundreds of meetings and repealed 248 Acts – the last time a principal Act was revoked by the Rajasthan assembly was 1962.

In a nutshell, the reform measures undertaken by the Vasundhara Raje Government in Rajasthan are laudable and would hearten investment inflows in the state. The businesses and firms across the globe look forward to more such reforms and better penetration, thereof, this would benefit the business, commerce and industries sector,alongside stimulating economic growth of Rajasthan with creating massive employment opportunities in the coming times.