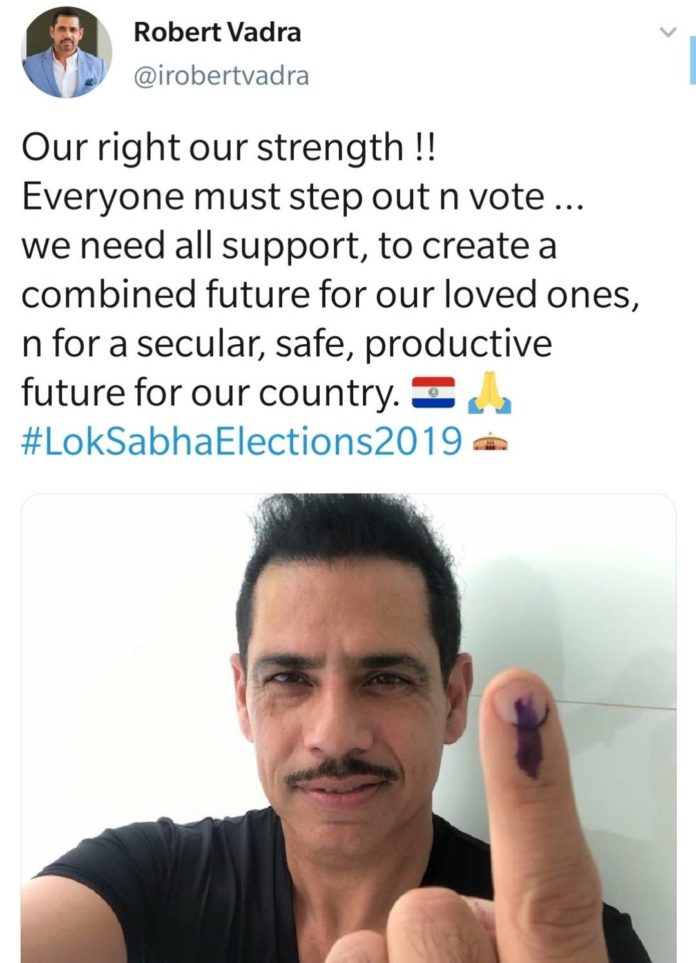 Robert Vadra After voting in the Lok Sabha elections Phase 6 in Delhi, Robert Vadra – the brother-in-law of Congress president Rahul Gandhi – on Sunday took to Twitter to post a photograph of him with the inked finger. It was accompanied by an inspirational message and an emoji of the tricolor.

However, the colors in the flag were red, blue and white – that of the Paraguay flag.

Soon after getting businessman’s post, netizens took no time to troll Vadra for this faux pas. Some called Robert Vadra a Paraguayan citizen.

Robert Vadra Declared Himself A Paraguian Citizen On 12th May, 2019

That was really quick Mr.Vadra from #Paraguay to #India what a transformation 😂😂

Robert Vadra tweeted Paraguay's flag instead of India. Save your lands Paraguay, save your damn lands! pic.twitter.com/cqTKO3kgzW

Robert vadra has Doremon's #Anywhere_Door .
He has casted his vote from Paraguay in this election.😂 pic.twitter.com/sbIWXA5Ac9

Robert Vadra planning to flee to Paraguay after May 23, 2019.@IncomeTaxIndia @FinMinIndia pic.twitter.com/uKuLsG0qOg

The first tweet he deleted is below. Possibly bought land in #Paraguay with the money he robbed in India. #RobertVadra pic.twitter.com/SLkoEJfJzK

Soon afterward, Robert Vadra tried to make amends by tweeting out a second post with the Indian tricolor. The original post was deleted, but screenshots of the tweet continued to circulate on social media. The Paraguay flag also began trending on Twitter.

Later, Robert Vadra tweeted another photograph of him holding a Tricolour along with a caption admitting to the mistake in the earlier post.

India lives in my heart & I salute Tiranga.Using a Paraguay flag in my post was just an aberration.I very well know tht”You all know it was posted by mistake" but u decided to”play up my mistake”,whn thr r such glaring issues to be discussed. It saddens me, but never mind! 😊👍 pic.twitter.com/ZPDva2eWSW

The Enforcement Directorate has filed a case of money laundering against Robert Vadra in connection with the purchase of a London property worth Rs. 17.77 crore. He was repeatedly called in for questioning in this connection over the last few months.