Wednesday, April 14, 2021
Home Feature The indecisive nature of Congress has increased the chances of BJP forming... 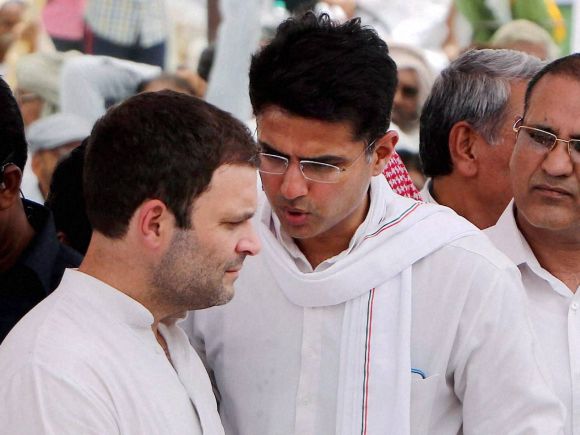 The Chief Minister candidate for Congress is not yet announced – something which has caused quite a stir and perplexity amongst the voters. Adding to the confusion is the Gehlot’s statement that there were a total of seven CM aspirants, including former Union ministers C.P. Joshi, Girija Vyas and Lalchand Kataria, Lok Sabha MP Raghu Sharma and leader of legislative party Rameshwar Dudi.

Ashok Gehlot hails from the Mali community and has been the Chief Minister of the state twice, but all in vain. The Congress Chief aka Bheem Lover is signaling that Sachin Pilot will be the chief ministerial candidate, and he is doing that in ways more than one. The party’s manifesto was released by the three prime leaders of Congress, but the one person who actually appeared as the key announcer, it was nobody else but the 42-year old Sachin Pilot.

Recently, Rajasthan Chief Minister Vasundhara Raje took a jibe at Rahul Gandhi, as she recalled the instance when RaGa mentioned his gotra as ‘Dattatreya’ and he is a Kashmiri Brahmin. The gotra was spelled by the priest who was conducting the puja.

Being a former Chief Minister, Ashok Gehlot is a party stalwart who has been expelled from the state politics and has been escalated to the Centre. The first list of Congress party in Rajasthan had Gehlot’s loyalists, which was followed by infighting in the party.

Rahul Gandhi explicitly mentioned in his rallies that he wouldn’t be allowing parachute candidates, but didn’t keep up to the promise. Owing to the expulsion of more than two dozen rebels which also included ex-ministers, the party was bound to entertain new candidates. Well, retention and promise-keeping is also a thing!

“It is here in the month of October that Rahul Gandhi said that he would not allow parachute candidates. But that is precisely what has happened,” he says.

Although BJP has very ably handled its rebels, Congress has lagged in that department too!  Ashfaq Kayamkhani, a social worker and political observer in Sikar said: “BJP has handled its rebels more tactfully.”

“Top BJP leaders personally spoke to its rebels and placated them. Congress even did not bother to get in touch with former ministers who had filed nominations as independents” he adds.

The indecisive nature of Congress has increased the chances of BJP forming the government in Rajasthan.