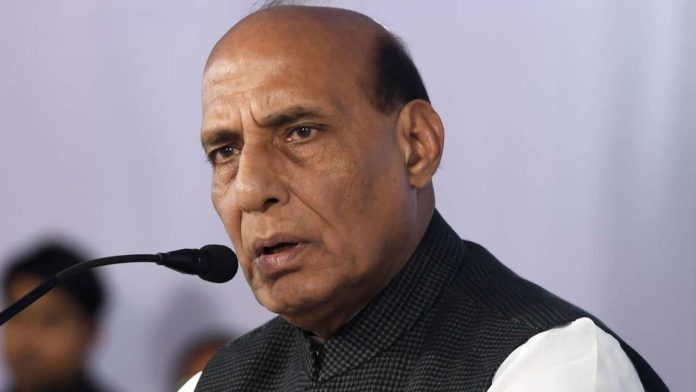 Union Minister Rajnath Singh was recently in Dholpur and he took a strong jibe at the opposition party during his public rally. He said that the reason for not declaring a Chief Ministerial candidate is simply because they know that they would lose in Rajasthan.

Targetting Congress on their decision to not announce a chief ministerial candidate is a stock of fun for one and all, without any shade of doubt. However, it was only Rajnath Singh who spoke the elephant in the room.

He pointed out the reason why the name hasn’t been announced yet. He said the reason why Congress is not announcing a name as they very well know that the party will be broken into pieces (for obvious reasons). The name announcement will spark fury between Ashok Gehlot and Sachin Pilot.

One statement which took all the limelight is that the condition of Rajasthan during the Congress raj resembles that of a marriage procession without the groom.

Also, the BJP party released its manifesto today, and it sure signals a “BJP Phir Se” – the government will establish “Grameen Startup Fund” with Rs 250 crores for the farmers. With this, the government aims at doubling the farmer’s income.

To connect all districts of the state, a “Rajasthan Mala” highway will be built. This will also help people reap the benefits of road transport services in numerous villages.

All Gram Panchayats will be bestowed with 108 Ambulance Services. Another addition to the manifesto is the making of the Rozgar Guarantee Law in the rural sector.

An allowance of Rs 5000 per month will be granted to the educated and unemployed citizens.

Well, development and magic are always happening in the BJP Raj. What do you think? We are awaiting Congress’s manifesto!