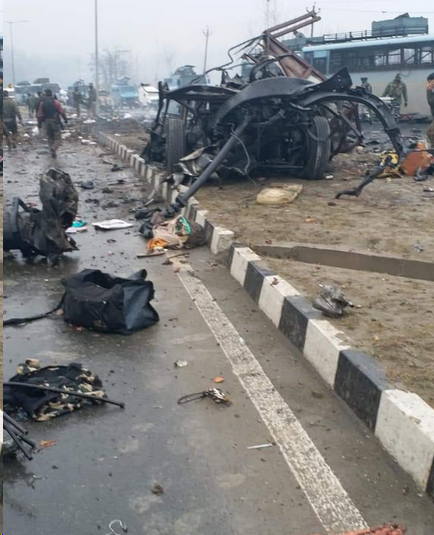 Today, the valley witnessed yet another horrific terrorist attack in Pulwama. According to the reports, 30 CRPF jawans were killed and 40 injured when a suicide bomber rammed a Scorpio car laden with 350 kg of explosives into a CRPF convoy in Awantipora town of Pulwama district.

As per initial reports, soon after the attack on the convoy, which was moving from Jammu to Srinagar, gunshots, and grenade blasts were heard. This is reported to be the worst attack after 2001 Jammu and Kashmir legislative assembly car bombing.

Attack on CRPF personnel in Pulwama is despicable. I strongly condemn this dastardly attack. The sacrifices of our brave security personnel shall not go in vain. The entire nation stands shoulder to shoulder with the families of the brave martyrs. May the injured recover quickly.

Sources said Adil Ahmad Alias Waqar, a resident of Pulwama, was the man driving the car that rammed the 55-seater CRPF bus. The Jaish-e-Mohammad terror group has claimed responsibility for the attack.

“Serious Breach” in the security

According to the sources, terrorists triggered attack while 70 CRPF vehicles, carrying 2500 CRPF personnel, were plying through the Srinagar-Jammu highway in Goripora area. One of the vehicles bore the brunt of the explosion. The stretch on which the incident occurred was largely believed to be sanitized of terror activities, and the authorities have termed it as a “serious breach” of security.

Union Minister General VK Singh lashed out at the terrorists who had carried out the attack in Pulwama.

As a soldier and a citizen of India, my blood boils at the spineless and cowardly attacks. 18 brave hearts from the @crpfindia laid down their lives in #Pulwama. I salute their selfless sacrifice & promise that every drop of our soldier’s blood will be avenged. #JaiHind 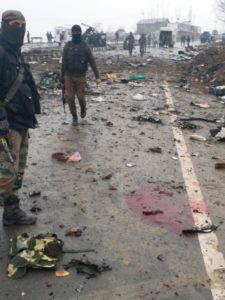 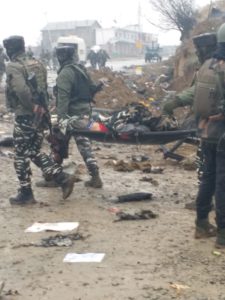 Today, even the “heaven on earth” must be weeping on its land soaked with our brave soldiers’ blood.