The veteran actor have lately been so much involved in controversies and has been making headlines with his attack on congress, Justice Ganguly and with his statements over intolerance, nationalism etc. It seems like he has become a spokesperson for the people who support BJP and who have similar ideologies. The actor was recently at the JNU campus to promote his upcoming flick, ‘Bhuddha in a traffic jam’. His supporters and followers were seen giving him a very warm welcome at the Jawaharlal Nehru University in Delhi.

Soon after he started speaking, the JNU campus became a battleground and clash of opinions was seen. The JNU students who were arrested around a month ago in a sedition case were released from Tihar Jail after they were granted interim bail. The two Umar Khalid and Anirban Bhattacharya were welcomed by the supporter students of the university with open hearts and arms. 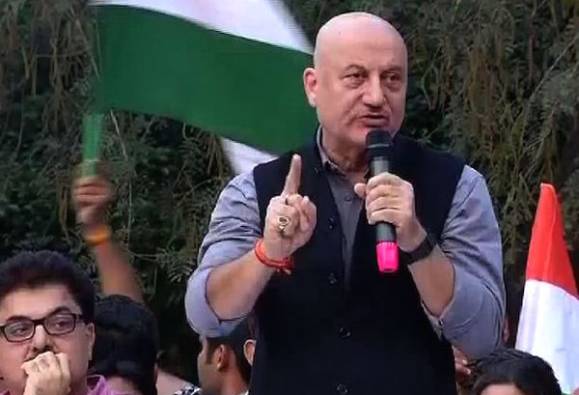 On their release, the actor said, “One who talks ill of the country, how can he be celebrated as hero? Has he got an Olympic medal? He is out on bail. He is not Sachin, Saina or Hanumanathappa,” He is out on bail, he hasn’t come back with a medal from Olympics that he should be accorded such huge welcome.”

Kher has been critical of JNU students in wake of the sedition row. The actor targeting straight at Kanhaiya when his supporters said that he belong to a very poor family, said, “He said that he comes from a poor family but my question is what did you contributed to remove their poverty? My father’s salary was Rs 90 when I got my first scholarship of Rs 200 and I had sent Rs 110 to my family. What did you do?”

The screening of Kher’s film went on in the middle of shouting of slogans like ‘Go back Anupam Kher! Go Back’ and ‘We don’t need nationalism certificate from you’ by All India Students’ Association (AISA) who gave him a thumbs down.

Further targeting the two, Umar Khalid and Kanhaiya he said, “We have laid the foundation of this nation. The national flag is in our hearts. Saying ‘Bharat mata ki jai’ is not a matter of debate.” He added, “You talk about everything that according to you is wrong in the country. But what did you contribute to nation other than your criticism? Let’s not talk about what is not working in the country but what is happening in the country. You are here to study and not do politics and even if you are doing it, don’t do any politics against the country.”

After his speech how could have the JNU president of University Students’ Union could have stayed quiet and also when all his followers were eagerly waiting to hear him. Khalid said, “This government wants to impose the Sangh Parivar agenda in the nation. This BJP and RSS tried to break us by charging us with colonial era law on us. But that will not deter us. Today, I stand here stronger than ever. And I with responsibility, I assert that this is a victory only in the first battle, our fight will continue till we eradicate this colonial era law sedition from the nation.”

Also, Kanhaiya, who was acknowledged bail in the sedition case, came up and said, “I have been to jail, I know what being there is. I am glad our comrades will be back but the struggle does not end here.”

Coming up in their support, Shehla Rashid Shora the vice president of JNUSU said, “With the release of comrade Kanhaiya, there was some relief. But now, with the release of Umar and Anirban, it seems that we can actually heave a sigh of relief before we can gear up again for an intensified struggle.” She added,”The arrest and possible arrest of our comrades had given us sleepless nights. I would get nightmares of police raids and wake up in the middle of night, scared and exhausted.”

After all these speeches and controversial comments, one thing is for sure that Anupam Kher is not wrong in his words and wise sayings and has been successful in making an impact on people of the country with similar views. Whereas, on the other hand Kanhaiya along with all his immature outbursts is continuing influencing JNU students to support him.

Watch here the full speech of Anupam Kher at the JNU campus and comment below what do you think,