Rajasthan Chief Minister Vasundhara Raje, on Friday evening, launched the Cancer Out Campaign at Jaipur’s SMS Stadium. CM Raje also flagged off the IPL match between Rajasthan Royals and Chennai Super Kings. Just before the match, she kicked off the campaign and presented a momento to Chennai Super Kings Captain Mahendra Singh Dhoni.

In order to promote the campaign, CM Raje also donned a pink saree at the event. She also tweeted a photograph from the event and expressed delight on attending the match.

This match was special for Rajasthan Royals as the team batted out in pink jersey with a message of spreading awareness about early cancer screening. The players including Rahane, Heinrich, and Krishnappa even got themselves screen one day before the match at SMS Hospital. 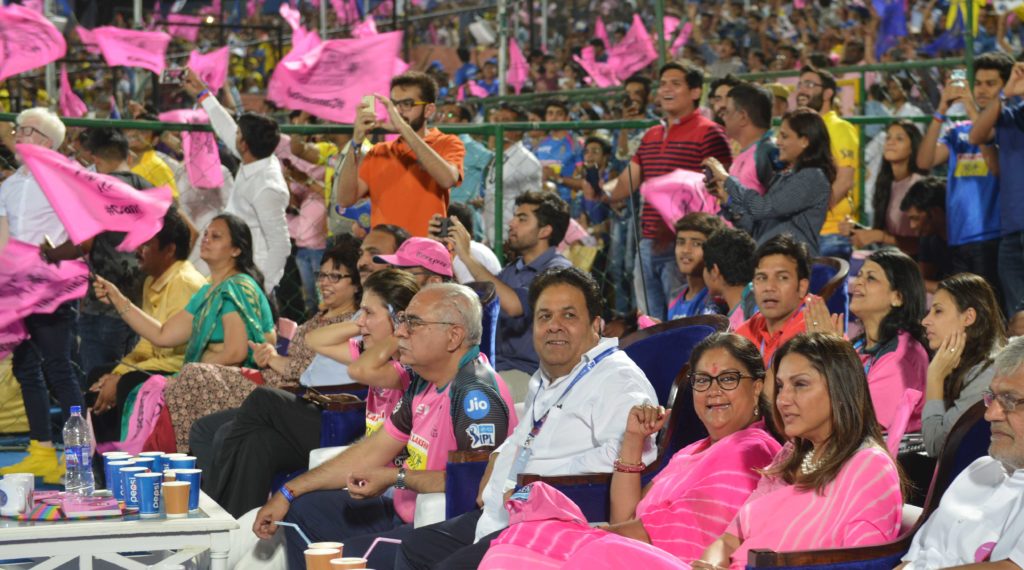 Moreover, the Royals were also able to defeat the Super Kings by 4 wickets in a nail-biting match. It was uncertain till the very last moment but the magnificent performance from Jos Butler helped the royals register the much-needed victory in the tournament. Buttler remained unbeaten with 95 run and his sixer in the last over of the match was the highlight of the match.

Talking about Super Kings, Suresh Raina and Shane Watson had an 81-run partnership followed by Dhoni and Billings contributing to the target with a 55-run partnership.

As far as the current position of the teams is concerned, Sunrisers Hyderabad stands at the top slot with 18 points followed by CSK which is trailing by 4 points. The third position is held by Kings XI Punjab which is yet to play its 11th match against Kolkata Night Riders today.