Rajasthan, one of the leading states in the country and emerging out as a global state, has witnessed development in the Chief Minister Vasundhara Raje’s regime like never before.  What the government claims during the elections is different and what actually is done on the ground level is different. The big question that arises in Rajasthan is that does the public of the state believe on the government? And do really CM Raje’s promises and claims have an effect on the ground level? We are also saying this because not only Vidhaan Sabha, Lok Sabha, Nagar Palika, Panchayat Raj, and also in the Rajya Sabha polls, BJP in Rajasthan has collected a lot of votes.

In 2013, BJP in the name of Suraj Sankalp, prepared its manifesto which covered various points which would thereby help resolve Swaraj. History has been a proof that whenever a political leader has approached the masses before and during the elections has always approached with their manifesto but the Raje government during the Lok Sabha elections in Rajasthan went to the public of the state, it had its ‘SURAJ SANKALP’. BJP won with majority in the state then. The time has again come, when we should look upon the ‘Suraj Sankalp’ of the BJP government in Rajasthan. Let’s try to understand were the promises made by Vasundhara Raje have really made a difference in the state or were merely an election move.

At the centre of the BJP’s manifesto when it won the elections in Rajasthan were agriculture and farmers and effective planning for the same was included in the manifesto. The question that now rises is what has the BJP government done for the farmers and the agriculture of the state? The answer is GRAM- Global Rajasthan Agritech Meet. More than 50000 farmers from across the country are expected to attend the meet.

Also, for cow protection and promotion, the BJP government talked about a different department in its manifesto. And as soon as the government came to power in Rajasthan, the first thing it did was to create a ‘Cow Husbandry Department’ and a separate Cow Ministry. BJP government took strict actions against the officials who were found guilty at the Hingonia Cow Rehabilitation Centre in Rajasthan.

Women and Child Development and Youth Employment was also one of the key highlights of BJP’s ‘Suraj Sankalp’ and thus many promises were made during the election which majorly included giving 15 lakh jobs to the youth and policies for women empowerment. What did the government do for them? Out of the promises made, BJP in the past 2.5 years have successfully given 9 lakh jobs and the government is doing some really great works in the field of women empowerment. Let’s have a look. CM Raje herself has adopted 99 girls so far and set an example for everyone in the state to promote girl child and girl education.

In regards to Panchayati Raj and Rural Development, there were several announcements made in the ‘Suraj Sankalp’. For the same, CM Raje directly monitored the developmental projects undertaken in various villages and hamlets from the CM’s office. 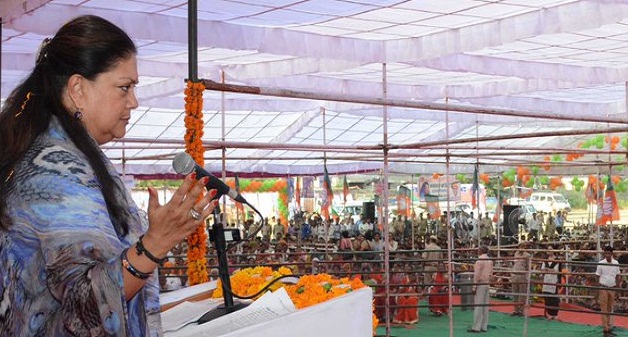 Talking about solar energy and water and irrigation plans by BJP government for the state, Rajasthan is the leading state in India. And for irrigation, mukhyamantri jal swavlamban abhiyan is proving out to be one of the best plans ever. She has also promoted tree plantation all over the state through a state.

For the trade industries and the mining, BJP initially could not do much. But over the time BJP has made some impressive policies which in long term are going to benefit the trade industries. Resurgent Rajasthan helped the state government to fetch MoUs of almost 3 lakh crore. Rajasthan was nominated by the World Bank as the second best state for ‘ease to business’.

Rajasthan Tourism has flourished in the leadership of CM Vasundhara Raje like never before. From nowhere to 6th most visited tourist destination in Asia, Rajasthan has surely done some great progress. CM Raje over the past 2.5 years has also promoted industrial tourism in the state.

‘Suraj Sankalp” was not merely a manifesto of the BJP government, but rather it was a resolution was linked to the expectations of the people of Rajasthan. BJP claims to fulfill all the promises that were made back during the time of elections as it says 73% of all the promises made have already been fulfilled. Rajasthan government surely has done many commendable jobs so far, but there’s lot more that has to be done. Rajasthan Politics says that no government has ever been elected twice in the state and the Chief Minister is replaced every time. But, BJP and the people related to this party claims that they will soon change this trend.

Only time will tell what happens next, because after all it will the public’s decision. By the mean time, we can only sit back and watch whether the public of Rajasthan will support Chief Minister Vasundhara Raje again to come to power and bring reforms like she is doing now.