Gudi Padwa is a celebration of New Year as per the Hindu calendar which happens to fall in the month of Chaitra. This corresponds to the month of March in the Gregorian calendar. This year, the festival will be celebrated on 18th March 2018 in Maharashtra.

Celebration in other states

The same occasion of Hindu New Year is observed in various other states in different forms. For example, in Andhra Pradesh, the festival is celebrated as Ugadi while in Karnataka it is observed as Yugadi.  However, in many states, the festival is observed a month later in the form of Puthandu (Tamil Nadu), Bihu (Assam), Naba Barsha (West Bengal), Pana Sankranti (Orissa) and Vaisakhi (Punjab). 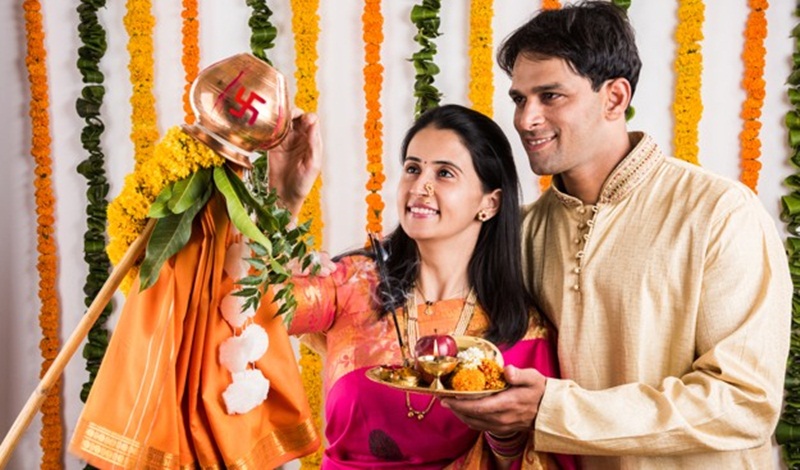 The main objective of the festival is to thank the God Almighty for the good harvest. Usually, women and men dress up in traditional attire and perform some rituals that differ from one state to another. As per a common vidhi, a silver or copper Kalash is propped up on a wooden stick and draped with a new piece of cloth and then worshipped with faith and hope.

They also decorate their homes with flowers and rangolis and welcome the spring season with good hopes. Since sugar rice is considered auspicious for this occasion, people prepare sugar rice, also known as Saakar Bhaat.

There are several stories behind the Gudi Padwa festival. Many believe that it was the day when Lord Ram returned Ayodhya after defeating Ravana and people welcome the Lord with great joy and celebration. Another story is that on this day Lord Brahma created the universe and life began on Earth.

It’s believed that on this auspicious day, the blessed ones extend support and donate money to the less fortunate ones. The day is also considered auspicious for venturing into new business establishments.