As Gujarat elections get closer, chief minister Vijay Rupani is facing one of the biggest political battles of his career and BJP has set itself a target of a record 150 plus seats in the 182 assembly seats.

In an interview, CM Vijay Rupani speaks about Rahul Gandhi, Patidar agitation, and jobs along with other issues.

CM Vijay Rupani said “Our target of 150-plus seats is very achievable. When Modi Ji was Chief Minister, we got 115 seats. Now he is the prime minister of the country, people of Gujarat will shower more love on him this time. The support that we are receiving at our rallies across the states clearly indicates that the BJP is heading towards its biggest victory ever. The BJP-led government at the centre has taken the country to new heights, therefore we are confident that our party will also return to power with a much bigger mandate. 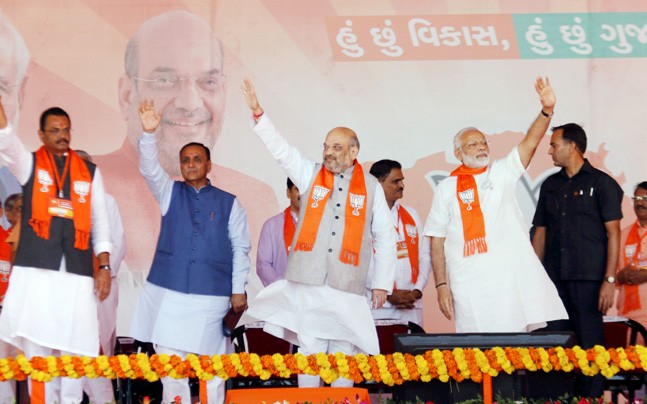 Talking about Patidar agitation CM Rupani said that “The Patidar community has supported the BJP for over two decades now. We have also accepted all the demands of the Patidar community which were within the framework of the law. People of Gujarat have now seen the real face of Hardik Patel. He doesn’t represent the Patidar community: he is an agent of the Congress, his own supporters have deserted him and exposed him before the public. He doesn’t talk about real issues now. He is only talking about defeating the BJP which clearly shows that he is misguiding the Patel community to fulfill his own political aspirations.”

He added that “PAAS leaders who earlier claimed that their only agenda was quota reservation, are seen fighting with Congress leaders for tickets. Hardik Patel has betrayed his community by playing with the feelings of the community.“

Commenting on Rahul Gandhi that he made allegations about jobs for the youth in the state are completely false and baseless. Gujarat is the number one state in the country when it comes to employment generation in the last one-and-a-half decades, In the last one year alone, the state government has given jobs to around 80,000 youth and has helped another 10 lakh people get jobs in the private sector.

Next month is Gujarat assembly elections, which is a home state of PM Narendra Modi. The polling for the two-phase elections will take place on December 9 and 14. Votes will be counted on December 18.