India has successfully achieved the milestone of 20 GW (GigaWatt) of cumulative solar energy installations ahead of the target of 100 GW of solar capacity by the year 2022 that was originally set as per the National Solar Mission. This achievement is believed to be the result of the major renewable energy push carried on by the Modi government. Since it came to power in 2014, the target was scaled up to 100 GW by 2022.

As per the latest reports by Mercom capital, the green energy market tracker, the utility-scale cumulative installations amount to around 18.4 GW. Besides, the rooftop solar installations account for 1.6 GW. 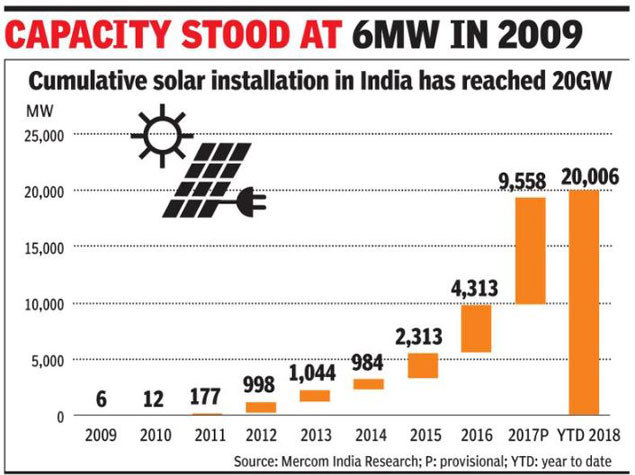 However, currently, the protectionist measures are posing a threat by slowing down the activity in the industry, thereby affecting the status of the solar capacity. It’s being speculated that the pace of these solar installations is not going to be quite high in the year 2018. This is because several government policies are keen on increasing the costs and hence the uncertainty.

As per the reports by Mercom, the revised target of solar installations of 100 GW is clashing with the government’s Make in India initiative that promotes domestic manufacturing. Factors like safeguard duty on imports and the port duty on imported modules are in a way affecting the installation activity in the industry.

As of 2017, the rooftop solar sector, as well as, the grid-connected utility-scale capacity has seen a steady growth. In order to commit to this segment, the government has allotted a project to the solar power producer Azure Power to electrify 152 schools with 11.35 MW of rooftop solar installations.