Six people have died and 33 are injured after a foot overbridge near the landmark Chhatrapati Shivaji Maharaj Terminus (CST) railway station in Mumbai collapsed Thursday evening. The collapse at one of the busiest stations in Mumbai took place during peak hours, around 7:30 pm when there was a lot of rush on the overbridge. Of the six casualties, two women were nurses at the GT Hospital, where some of the injured have been taken.

Eyewitnesses said repairs were being carried out on the overbridge this morning, but it was still being used. Lakhs use this foot overbridge – built in 1984 – every day.

CM @Dev_Fadnavis ordered high level enquiry into #MumbaiBridgeCollapse incident and announced ₹5 lakh for the next of the kins of deceased and ₹50,000 to the injured and their medical expenses will be borne by GoM. pic.twitter.com/k6mR5PCGzb

Maharashtra Chief Minister Devendra Fadnavis told media persons, “Bridge collapse is a saddening event. We have ordered a high-level inquiry. This bridge was constructed in 1980. This bridge was found ‘fit’ in the structural audit. We are finding out who is responsible for this audit. We will take strict action against those responsible. Ex-gratia of Rs 5 lakh to the kin of the deceased and Rs 50,000 to the injured. A preliminary inquiry report will come soon. 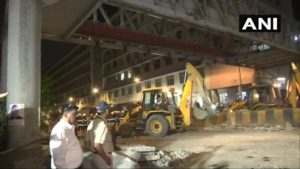 Over seven crore passengers commute in nearly 2,500 trains daily on Mumbai’s rail network, a lifeline for the city’s two crore residents. An average of almost 10 people died on the suburban railway every day, either from falling off crowded trains or while crossing the tracks.

Nine months before that, in 2017, 23 people were killed in a stampede when the Elphinstone Bridge had collapsed.

The Chhatrapati Shivaji Maharaj Terminus is a UNESCO World Heritage Site and serves as the headquarters of the Central Railways.