New Year signifies new beginnings and we have the choice of either embracing it with peace of mind or with letting your enthusiasm dance with nonchalance. Loser Festival in Ladakh offers both of these and embraces your madness like none other.

Literally, the word Losar combines Lo and Sar, where Lo means “year” and Sar means “new”. During this time of merriment, Ladakh turns into a Pandora of colours, culture and euphoria. Also, this unique new year celebration has an enthralling story behind it. Jamyang Namgyal, the ruler of Ladakh was an voyage against the Balistan forces. Further, the prophets suggested him to wait for it for coming year. Thus, the wait time preceded the new year celebration of that year of about a month duration. From that instance only, they follow the tradition of celebrating the Loser in November, which is eleventh month of the year. This is also the period of the finishing time of harvesting season in Ladakh. 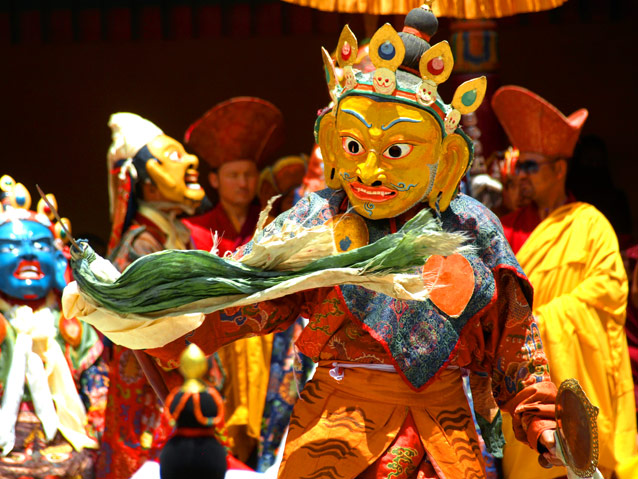 The fest starts with some oomph and fiery process of people carrying blazing torches and reciting prayers. The popular belief behind the procedure is that, it purifies the bad karma of the whole year and shoo away infectious and evil spirits. Also, a lavish meal is prepared for Gods, ancestors and deities. Local folks indulge in embellishment of temples and shrines.  The gompas are decorated by Buddhists there and make the offerings of Loma Losar.

If you are a first time visitor, the stage fights and fire-torch dance of the Ibex deer is something you should not miss. The performers from Ladakh represents the grandeur of the fest with their innovative costumes and never fading smiles. There are endless things like stage battles, dance, music and sumptuous feast to count upon for your joyous time there.

With offering the local brewed barley beer, like chang and barley flour which is sweet in taste called phye mar , boasts the gastronomical manifestation of this place and festival.

Losar is the festival celebrated by Buddhists in all nearby countries including Bhutan, Tibet, India and also in the Tibetan communities in the world. The flowing bonhomie of local dwellers will transform you from a mere spectator to participant.