Padmavati has been facing controversies since its beginning, earlier this year they disrupted in the shoot of the film in Jaipur. There is constant opposition by the Rajput Karni Sena against the Sanjay Leela Bhansali’s film.

After the brave statement come for lead actress Deepika Padukone said that nothing can stop the release of Padmavati. Rajput Karni Sena take this statement as a challenge. In reply Mahipal Singh Makrana threat the makers and actress in a self-made video. He said, “Rajputs never raise a hand on women but if need be, we will do to Deepika what Lakshman did to Surpanakha.”

Rajputs never raise a hand on women but if need be, we will do to Deepika what Lakshman did to Shurpanakha: Mahipal Singh Makrana of Rajput Karni Sena in a self-made video #Padmavatipic.twitter.com/82AWKGO7IU

Rajput Karni Sena chief Lokendra Singh Kalvi said “We will gather in lakhs, our ancestors wrote history with blood we will not let anyone blacken it; we will call for Bharat bandh on December 1.” on the release date on the film.

We will gather in lakhs, our ancestors wrote history with blood we will not let anyone blacken it; will call for Bharat bandh on 1 December: Lokendra Singh Kalvi, Rajput Karni Sena #Padmavatipic.twitter.com/zYvdHLsAB2

Protest In Rajasthan And Other States

After the attack on the sets of the film in Jaipur, Sanjay Leela Bhansali, and Rajput Karni Sena reached an agreement on January 30 where the makers said they will take the Rajput leaders on board before the film’s release. Sena Chief Lokendra Singh Kalvi, who claims to be 37th descendant of Padmini’s husband Ratan Singh of Chittorgarh, said the filmmaker did not honor the commitment and released film’s trailer. 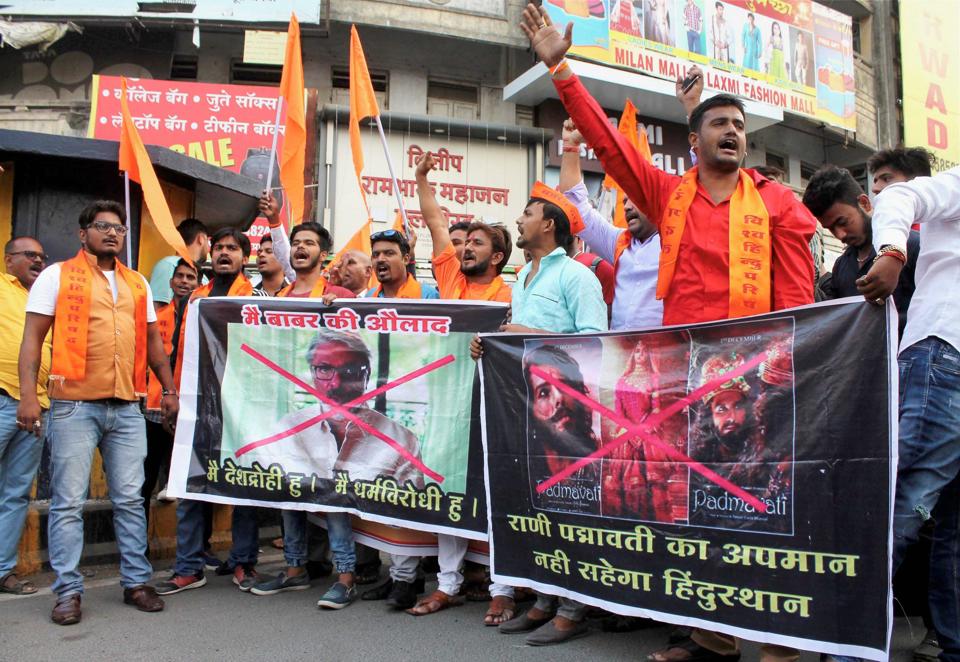 Now the Rajput Karni Sena and other non-Rajput organizations like Dharohar Bachao Samiti, Shiv Sena, and Akhil Bharatiya Kshatriya Mahasabha are protesting and demanding a ban on the film. Bhopal, Gwalior, Ratlam, Banglore, Surat have also witnessed protests in the past few days against Padmavati.

Can Cause Law And Order Problem

On Wednesday Uttar Pradesh government wrote a letter to I&B officials to ensure that the public view and dissent on the matter was taken into consideration before the film is certified. The state government has also pointed out that UP is going for urban by-polls on November 22, 26 and 29 and counting of votes would take place on December 1, making it a fragile period for the law and order machinery.

Read Also- Costumes of Deepika, Ranveer, Shahid cast a magic spell in Padmavati trailer and How. Dive in!