Kulbhushan Jadhav was allowed by Pakistan to meet his mother and wife in a room with a glass window separating them and an intercom served as the communicating device. What was thought as a much-awaited family reunion turned out to be a torturous and humiliating experience for Kulbhushan Jadhav’s family. Pakistan not only violated the terms that it had earlier agreed upon but also behaved in an absurd manner.

Speaking on this issue, External Affairs Minister Sushma Swaraj vent out her anger, disgust, and disappointment as to how Kulbhushan Jadhav’s mother and wife were treated by the Pakistan media and authorities. Mrs. Swaraj talked to Kulbhushan’s mother Avanti and found out that a lot of things on the part of Pakistan appeared to be wrong. 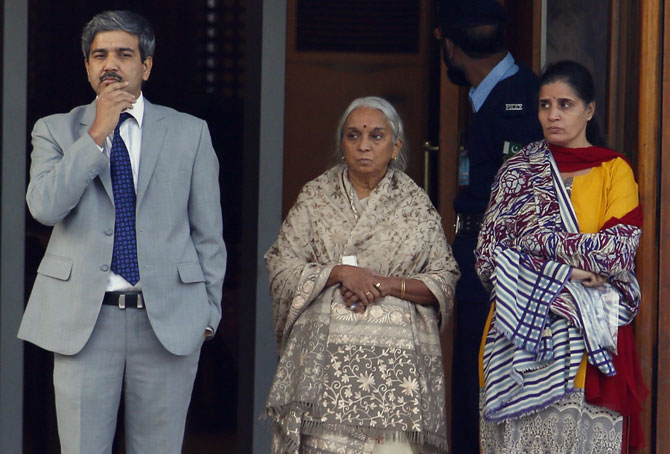 Firstly, his mother and wife were made to change their clothes and put on Salwar suit. Mrs. Avanti always wears a saree but she was made to change into a salwar suit. Then their bangles, bindi, and even mangalsutra were taken away. When Jadhav looked at his mother, the first thing he asked was, ‘How is Baba?’ fearing that something might have happened to him as his mother appeared like a widow without any bindi or jewelry.

What came as a more shocking disclosure was the fact that Kulbhushan’s wife was asked to remove her shoes and wear slippers citing an absolutely disgusting reason that she might be having a chip in her footwear. To this, Mrs. Swaraj pointed out that had there been a chip, it would have been detected at the airport already. And the worst part was that they didn’t even return her shoes when she was leaving.

But the humiliation doesn’t end here. When Mrs Avanti tried to her son talk in Marathi, she was asked not to do so. After that when she kept speaking Marathi, the intercom was disconnected.

And still there’s more to it! Pakistan made sure that the media could reach Jadhav’s mother and wife as they reached there. Despite the agreement between India and Pakistan that media will not be allowed a close access to the family, not only Pakistan let the press people come near them but they also harassed and taunted the two ladies with disturbing questions about Jadhav.

Reportedly, the family members are now more depressed than they were earlier before the meeting. What could have been a step towards strengthening Indo-Pak ties has just been used as propaganda to create unnecessary hype and unwanted harassment of Kulbhushan Jadhav’s family.

Kulbhushan Jadhav is a former Indian Navy officer who was arrested in March last year and was sentenced to death by Pakistani military court for allegedly spying but India dismissed all the allegations.