Vijay Diwas is observed on 16th December to salute the martyrs and remember their valuable sacrifices for the country in the Indo-Pakistan War of 1971. It’s the day when Pakistani Forces in East Pakistan (which is now Bangladesh), surrendered with around 1 lakh being taken as prisoners of war (POWs) and eventually led to the liberation of Bangladesh.

Since that day, every year, both India and Bangladesh celebrate Vijay Diwas on 16th December to mark the victories of the countries over Pakistan. Although the war ended with Pakistani force surrendering to India and Bangladesh, Vijay Diwas is also a reminder of the valor and sacrifices made by the Indian Army soldiers who fought fearlessly in the war.

It all started when Bangladesh was a part of Pakistan and was referred to as East Pakistan. The conflicts between Sheikh Mujibur Rahman and West Pakistan’s Zulfikar Ali Bhutto started a liberation war. In 1971, Pakistan began a crackdown on West Bengal that turned into genocide and ultimately led to the formation of a resistance force called Mukti Bahini. 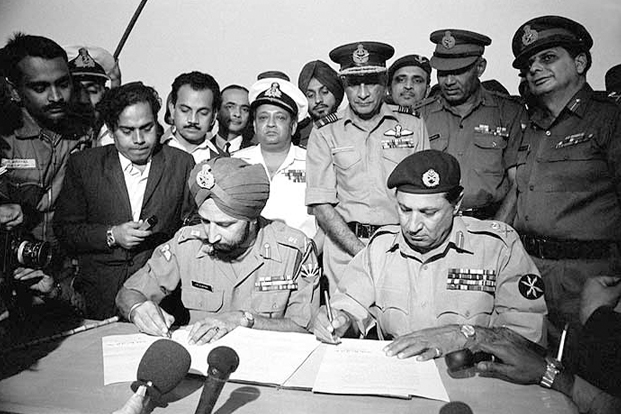 The refugees from East Pakistan flooded India and the then Prime Minister Indira Gandhi denied the claims of West Pakistan that it was all an Indian conspiracy. After all the diplomatic routes were closed, India had to resort to the war. Even though the war had to begin on December 4, Pakistan launched a surprise attack on 8 military airfields of the Indian Air Force.

India recognized Bangladesh and lent strong military action thereby starting the war of 1971. In association with Mukti Bahini, Indian soldiers fought the battle against the Pakistani Army and it eventually ceased the unilateral ceasefire, putting an end to the war.

Here are some tweets on Vijay Diwas by several dignitaries:

On the occasion of #VijayDiwas , Smt @nsitharaman pays homage to the brave martyrs who lead India to victory in the war of 1971. She places a floral wreath at the Amar Jawan Jyoti at India Gate. Jai Hind! pic.twitter.com/HPvF399hHm

On #VijayDiwas we salute the unflinching courage of all those who fought in 1971 and protected our nation diligently. Every Indian is proud of their heroism and service.

Salute to indomitable courage of our soldiers on #VijayDiwas pic.twitter.com/toC0d4laZw

Remembering on #VijayDiwas the valour, commitment and determination of our soldiers, who bravely fought for the liberation of Bangladesh in the 1971 War. #JaiHind pic.twitter.com/h70vquxuz0

On Vijay Diwas, we remember with gratitude our Armed Forces who defended our nation and upheld universal values of human liberty in 1971. In particular, we pay tribute to those who lost their lives in that valiant effort #PresidentKovind