As the government on Monday successfully concluded the spectrum auction, collecting over 1.50 lakh crore in bids from four companies including Reliance Jio, Bharti Airtel, Vodafone Idea, and Adani Data Networks, the fifth generation (5G) telecom services is likely to be launched in India by October this year.

Ashwini Vaishnaw, the Union Minister of Communications, Electronics, and Information Technology, revealed during a press conference after the auction for 5G spectrum ended that 51,236 MHz, or around 71 percent, of the total spectrum on offer totaled 72,098 MHz.

40 rounds of bidding were completed over the course of the previous 7 days. The bid is for a total of 1,50,173 crore rupees.

Speaking to ANI, Mr. Vaishnaw stated that the successful bidders will receive their spectrum allocation by August 10 and that the country would likely see the launch of 5G services by October of this year.

“Auction has been concluded, and all formalities, including authorising and allocating the spectrum, will be done in the coming days, until August 10,” he stated.

“It appears that 5G could be introduced in the nation by October. The upcoming 5G spectrum auction shows that the nation’s telecom industry has made significant progress toward 5G, “added the minister.

According to Mr. Vaishnaw, more spectrum availability will raise the calibre of telecom services offered in the nation.

Reliance Jio Infocomm Limited submitted bids of Rs. 88,078 crore, or 58.65 percent of the total amount of Rs. 1,50,173 crore that the government got as a result of the 5G spectrum auction. 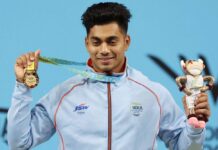