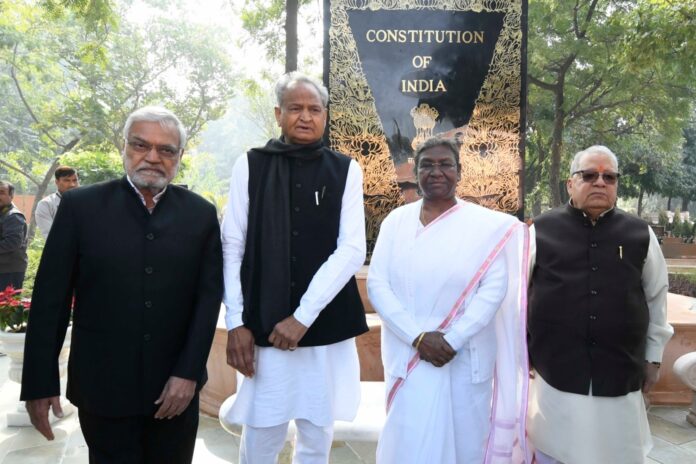 In Jaipur on Tuesday, President Draupadi Murmu inaugurated the Constitution Park built at Raj Bhavan and unveiled the plaque of the park. During this, a documentary on the theme of Constitution Park was shown to the President and Governor Kalraj Mishra and CM Gehlot were present.

For the people of Rajasthan, the doors of the Raj Bhavan will now open for the common people in the new year. On Tuesday, President Draupadi Murmu inaugurated the Constitution Park built at Raj Bhavan on the first day of the two-day state tour in the capital Jaipur and unveiled the plaque of the park. During this, a documentary on the theme of Constitution Park was shown to the President and Governor Kalraj Mishra presented a memento to Murmu. Rajasthan CM Ashok Gehlot was also present in the program. Earlier, on Murmu’s arrival in Jaipur, the Governor and CM welcomed him at the airport, after which the President also paid tribute to the martyrs at Amar Jawan Jyoti.

Meanwhile, Assembly Speaker Dr. Other prominent public representatives including CP Joshi and Self Government Minister Shanti Dhariwal were also present. It may be known that this is the first visit of President Draupadi Murmu to Rajasthan after becoming the President. On the other hand, President Draupadi Murmu will leave for Mount Abu in a special army aircraft on her two-day tour, where she will attend the program of Brahma Kumari Divine University as the chief guest. After this, after night rest, the next day on January 4, she will leave for Pali where she will participate in the National Jamboree program organized in Rohat.