Bollywood actress Deepika Padukone inaugurated the FIFA World Cup trophy last night. Deepika has become the first Indian to do so. Now its photos and videos have also surfaced, in which Deepika is looking very glamorous. At the event, Deepika was seen in a white shirt and golden over coat.

Deepika entered the event accompanied by a Spanish footballer, Kerr Casillas and unveiled the trophy. This trophy is made of 6.175 kg and 18 carat gold and malachite. Only a select few can touch and hold the trophy, including former FIFA World Cup winners and Heads of State.

Along with this, Deepika’s fan has shared a video of her, in which she is seen enjoying the match with husband Ranveer Singh. In this video where Ranveer is seen discussing with his friend about the match. While Deepika is seen standing quietly watching the match.

Many celebs came to watch this match

The FIFA World Cup was held between Argentina and France. The eyes of the world were on this match. After 38 years, Argentina has won the FIFA World Cup trophy. Many stars including Shah Rukh Khan, Deepika Padukone, Nora Fatehi, Karisma Kapoor, Raveena Tandon and Karthik Aryan had come to watch this historic match. 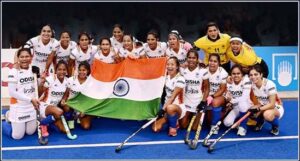 On the other hand India clinched the FIH Women’s Nations Cup title by defeating Spain 1-0 in the final here on Saturday. By winning the tournament, held for the first time, the team confirmed its place in the 2023-24 Pro League. Gurjit Kaur converted a penalty corner in the sixth minute which proved to be the deciding factor. The Commonwealth Games bronze medalist ended her campaign in the eight-nation tournament with five straight wins. Coach Yanke Schoepmann’s side beat Ireland 2-1 in a shootout in the semi-finals here on Friday.