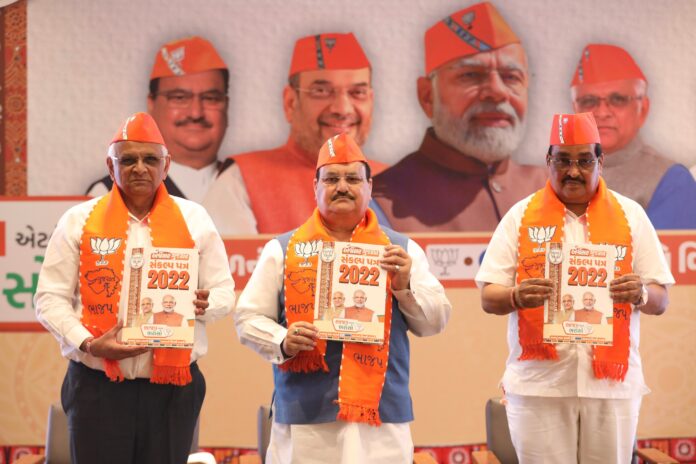 JP Nadda said – BJP government does what it promises

BJP National President JP Nadda released the manifesto. During this, Gujarat Chief Minister Bhupendra Patel and Gujarat BJP President CR Patil were also present. Nadda said that this resolution letter of ours is not just a document. The BJP government does what it says. We go by the constitution.

Promise to make institute like AIIMS in Gujarat BJP has promised to make 3 Civil Medicity and two AIIMS like institutes in the state in the manifesto. Apart from this, two sea food parks will be set up in South Gujarat and Saurashtra. The BJP leader said that 1000 additional mobile veterinary units would be set up in the state. Along with this, a law will be brought for recovery from anti-social elements.

Gujarat BJP president Patil said that opinion was taken from more than one crore people of Gujarat for preparing the manifesto, for which a WhatsApp number was also issued. Youth were also contacted. So this manifesto is made after alot of official discussions and public opinions
Some more main points in BJP manifesto
•BJP promises to allocate Rs 10,000 crore under Gujarat Agriculture Infrastructure Fund and to invest Rs 25,000 crore to expand irrigation network.
•BJP said that this time after returning to the government, they will strengthen Gaushalas with an additional amount of 500 crores and they will also setup 1000 additional mobile veterinary units for animal welfare and safety.
•There is a proposal to set up a sea food park each in South Gujarat and Saurashtra.
•Promise to build India’s first blue economy industrial corridor and strengthen fishing infrastructure
•The annual limit under the Pradhan Mantri Jan Arogya Yojana (Ayushman Bharat) will be increased from Rs 5 to Rs 10 lakh whereas EWS families will also get Rs 110 crore scheme for health services
•Health facilities Maharaja Bhagwat Singh ji will create a health fund of Rs 10,000 crore
•With a budget of Rs 10,000 crore, 20,000 government schools will be converted into schools of excellence with a proper Uniform Civil Code (UCC)
•Also promised free education from KG to PG (Nursery to Post Graduation) for girls.