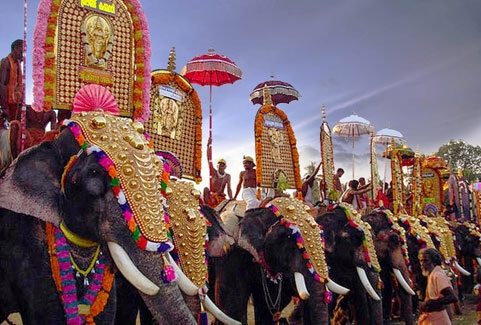 Kerala is known for its refreshing backwaters. But did you know that it also famous for a unique festival celebrated there? Known as the Parippally Gajamela, this festival is celebrated at Paripally, 48 km to the north of Thiruvananthapuram.

An enchanting tryst with the Elephants

The deities are offered elephants and this ritual is commonly called the Nercha offering. Devotees believe that their wishes will be granted by deities. The common belief is that deities are happy after they receive elephants. For this purpose, over 100 elephants are beautifully embellished pieces. These elephants line up outside the temple and accentuate the beauty of the festival.

The festival has various other highlights. From magnificent dance practices to musical melodies, the Paripally Gajamela is a gamut of lots of frenzy and social engagement.

The elephants wear mahouts on top of their heads, which are tucked with peacock feather fans and silk parasols (muthukuda). These elephants are founding grooving their feet and moving around to the tune of the Kerala orchestra.

The Paripally Gajamela festival is celebrated on March 4, 2018. A one of its kind festival, Paripally Gajamela takes place at the Paripally Kodimootil Sree Bhadrakaali Temple. This temple is dedicated to Goddess Bhadrakali.The entire festive proceedings are followed by an elephant procession on the tenth day.

If this festival and love for elephants is invoking a strong desire to visit this festival, don’t think twice. Here is how you can reach the festival.