Friday, January 27, 2023
Home Entertainment ‘Freddy’ had troubled nights for me and also gave me goosebumps while...

Actor Kartik Aaryan says his upcoming film ‘Freddy’ gave him restless nights, but he says it was important to focus on the bigger picture and didn’t have to curtail his routine activities while shooting for the film. tried. Kartik who will be seen in the very intense character of ‘Freddy’ talked about his preparation for the character.

“I was really in Freddy’s world while shooting the film. It was important for me to be in that headspace and go on set and perform. I’ve had sleepless nights because of ‘Freddy’ but it’s important to focus on the bigger picture.” I tried to reduce my regular activities while shooting for Freddy so that I could focus on the film and the character.”

“After the wrap of movie, I connected with my friends and family, who kept me grounded and helped me get back to reality and to my normal being,” he said. 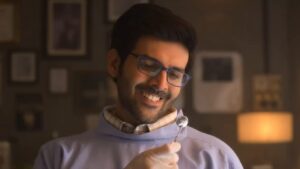 Karthik’s much-awaited Freddy is about the journey of Doctor Freddy Ginwala, a shy, lonely and socially awkward person who loves to play with his miniature planes and his only friend is his pet tortoise ‘Hardy’.

Disney Plus Hotstar recently announced its upcoming spine chilling romantic thriller ‘Freddy’. Freddy is an action thriller movie written and screenplay by Parveez Sheikh and directed by Shashank Ghosh. The movie casts Kartik Aaryan, and Jeniffer Piccinato in the main lead roles along with Alaya F, Tripti Agarwal, and many others who have seen them in supporting roles. The music was composed by Pritam Chakraborty while the cinematography was done by Ayananka Bose. The film is produced by Ekta Kapoor, and Jay Shewakramani under the Balaji Motion Pictures banner.