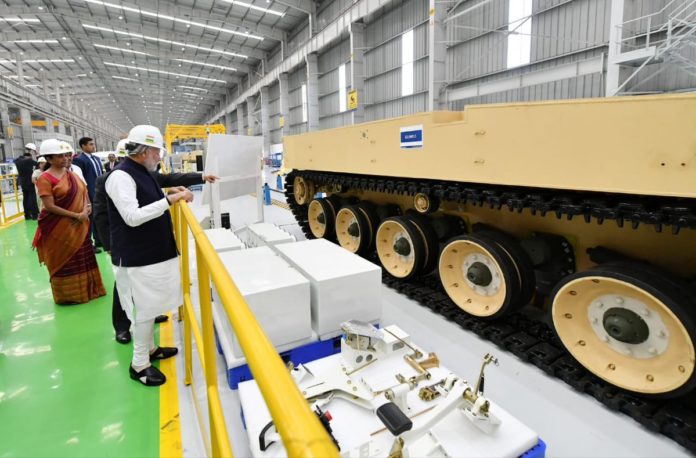 Prime Minister Narendra Modi inaugurated the Armoured Systems Complex of Larsen and Toubro (L&T) in Gujarat today. This is the first private facility in the country where the K9 Vajra self-propelled Howitzer guns will be manufactured. Defence Minister Nirmala Sitharaman was also present at the inauguration today.

Checking out the tanks at L&T’s Armoured Systems Complex in Hazira. pic.twitter.com/zf7wRrbX7Y

L&T had in 2017 won the Rs. 4,500-crore contract from the Ministry of Defence to supply 100 units of Howitzer Gun K9 Vajra-T 155 mm/52 caliber tracked self-propelled gun systems to the Indian Army under the Centre’s ‘Make in India’ initiative.

The company has set up the Armoured Systems Complex at Hazira, around 30km from Surat, to manufacture and integrate advanced armored platforms, such as self-propelled artillery Howitzers, future infantry combat vehicles, future-ready combat vehicles, and future main battle tanks.

K9 Vajra contract involves delivery of 100 such systems in 42 months, which is the largest contract awarded to a private company by the Ministry of Defence.

L&T had signed a transfer of technology contract for guns with South Korean company Hanwha Corporation. This is one of the most anticipated Make in India project by Narendra Modi-led BJP government which is successfully running.