Wednesday, January 26, 2022
Home Politics Vasundhara Raje takes the road not taken. Will she break the 5... 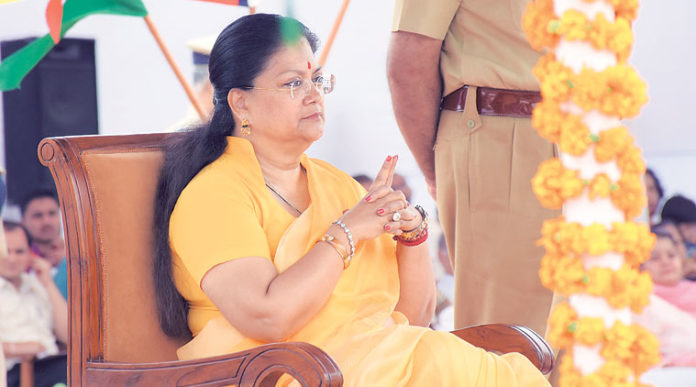 The majestical state of Rajasthan has been treading on the path of unprecedented success in ameliorating and bolstering every arena of it’s grandeur, be it Tourism, Traditional food, awe-inspiring culture or it’s mesmerising architecture.

But as they say, “ Look beyond what you see.” The desert state of Rajasthan is known for a multiple other reasons. If you talk to a local here (preferably a lower-income class worker), you will realize that there are a battery of life-enhancing schemes which have been initiated in the state by the incumbent BJP government.

BJP in November 2016 pioneered the ‘Digital India wave’ which swept away the whole nation for good.  Interestingly, in the state of Rajasthan, the ‘online transaction system’ was ushered in much before the whole country embraced this paradigm shift in payment regime.

The Queen of Reforms, as Vasundhara Raje is popularly known has made earnest efforts to transform the state in her three year tenure. Although, Ms. Raje has devoted her day and night towards betterment of the state, she failed to become a recipient of justified love and trust in reciprocation. Her works have gone unnoticed by the public, who believes and runs on oppositions’ false remarks via media houses which are reportedly given enormous amounts of money from the opposition for fabricating utterly negative stories about Raje.

Rajasthan state Assembly elections in 2018 is a landmark election in the monotonous election history of Rajasthan, a state which has oscillated between BJP and Congress after every lustrum. In 2018, Vasundhara Raje has brighter chances to win the elections because of reasons more than one. If you blame the opposition’s young face who lacks administrative skills by huge margin and depth, you will do it wrong. There are a slew of other developmental works which will buttress Raje’s success in 2018 elections.

Helmed by Vasundhara Raje, BJP Rajasthan initiated the Bhamashah scheme, which is considered as a landmark scheme in the whole country. This scheme reinforces ‘Naari-shakti’ in the state. It involves direct transfer of monetary benefits to the women of the house, in whose name the Bhamashah card is issued.

Under this scheme, every below-poverty family becomes a recipient of a Bhamashah card equipped with biometric system. Although the Bhamashah card is issued in the name of lady, her whole family becomes eligible to avail a multitude of valuable benefits. The notable objectives of this Scheme is financial inclusion, women empowerment and effective service delivery.

States like Tamil Nadu and Maharashtra also have these schemes but New India Insurance Company’s CMD described Rajasthan’s health insurance scheme as the best in the country. According to official data, more than 7 lakh people havebecome beneficiaries of this scheme.

Under this scheme, a girl’s account is credited with Rs 50,000 in installments right from her birth till the time girl passes Class 12. The amount is linked to the Bhamashah Card ensuring that the money stays with the women of the house. 3.18 Lakh girls have got the first installment since 2016.

Did you know that Rajasthan is only endowed with 1.1% surface water. Not only this, it is a state where groundwater meets more than 90% of the demand. Despite such a water crisis, I have seldom heard any word about a Congress scheme directed towards water conservation.

Contrarily, Jal Swavlamban Abhiyan, an innovative water-centric scheme initiated by the BJP has garnered a lot of support and cooperation from all Rajasthanis.

Vasundhara Raje works from the ground level. As they say, “ Essentials first”, this visionary lady battles all bottlenecks to ensure that Rajasthan dwellers  are not deprived of any basic amenity, at any point in time.

More than 3500 villages have been identified in the first phase and the government plans to make them water sufficient by recharging their ponds, lakes, step wells, etc.

The Jal Swavlamban Abhiyan has successfully managed to raise more than 49 crores while the government also plans to cover 20,000 villages till 2019.

Afforestation also holds plays paramount importance in this scheme. In the first phase, 26.5 lakh plantations have been done and 93000 water harvesting structures have been built.

This move aims to raise water levels in tandem with maximum trees plantation in the state. A noble scheme with an innovative approach is what defines Jal Swavlamban Abhiyan.

These are mobile kitchens which serve breakfast for Rs.5 while lunch & dinner at Rs.8. It has targeted beneficiaries from daily wage workers, students, auto drivers. The scheme is launched in 15 cities in Rajasthan.

Rajasthan is emerging as a noteworthy hub of globalisation and sustainable development, in every sense of the word. It has embraced a road-not-taken. Thanks to Vasundhara Raje for it has made the state what it is today – an impeccable repertoire of culture, transparency and integrity.