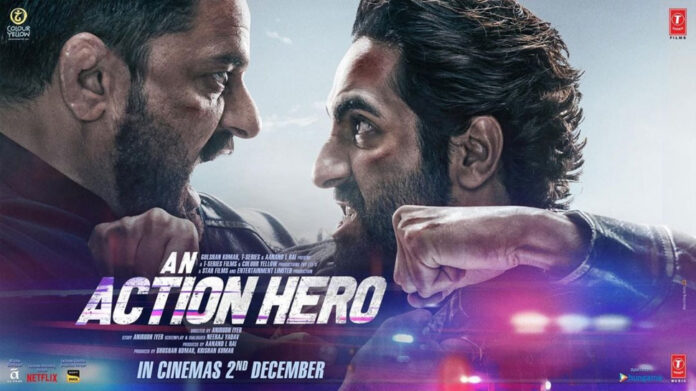 The film ‘An Action Hero’ is a lesson in a way for Ayushmann Khurrana and he probably learned this lesson even before starting this film. As it happens in a cricket team, if one batsman does not play, then the second, third or fourth can come and handle the innings. Cinema is also something like that.

Although the name of Ayushmann Khurrana is enough, for a different identity of a Hindi film. But, Ayushmann, who has been continuously doing films on taboo subjects in the society, has done a completely entertaining film this time, leaving the loop of his similar films. The name is also very Bollywood type, ‘An Action Hero’. If we look closely at Ayushmann’s cinema, then it is understood that as long as he remained just an ordinary actor, his films continued to be successful. He remained an actor, his films continued to be successful. There are plenty of action packed scenes and at least two steamy item numbers to pause and talk about.

Producer Aanand L. Rai has bet on his longtime assistant Anirudh Iyer in the film ‘An Action Hero’ and Anirudh, making his debut film, has also been successful in proving his worth. Story starts as Manav as the main lead and he plays the role of a superstar. He has his own swag. On screen as well as in personal life. An accident happens on its sets. The one who died was the brother of an arrogant politician from Haryana. Case takes worst turns when this leader reaches London behind hero to avenge his brother’s death. Most of the films during the Corona period were shot outside India because there were less restrictions. ‘An Action Hero’ is also a film made in the same period and considering those problems, Anirudh has been successful to a great extent in his endeavours.

The film ‘An Action Hero’ is a lesson in a way for Ayushmann Khurrana and he probably learned this lesson even before starting this film. As it happens in a cricket team, if one batsman does not play, then the second, third or fourth can come and handle the innings. Cinema is also something like that. If in a film there is a strong villain with a hero, a narcotic heroine, some co-actors chirping, then the audience’s attention is not able to stay on the post-mortem of any one character. He is a protégé of Aanand L. Rai but cinema is his own. Imprints of his mentor are nowhere visible in the movie.

The musical part have somewhere spoiled the fun of the film.

However, the fun of the film without heroine is spoiled by the remix songs inserted in ‘An Action Hero’ and it is something like what happened with the film ‘Vikram Vedha’. The audience, who were expecting an action film by Hrithik Roshan, were left disappointed after watching the first song ‘Alcoholia’ from the film. This one song burst the entire bubble of hype around the film. The two songs ‘Jeda Nasha’ and ‘Aap Jaisa Koi Meri Zindagi Mein Aaye’ released before the release of the film are the culprits of reducing the curiosity to watch the film ‘An Action Hero’. Anirudh’s probably did not work in front of the producers of the film and for this he too must have laid down his arms. It could have been a great film without the songs.

Whole cast have given their best

This movie has one of the best cast. Jaideep who was earlier seen in commando have done a great job and according to some people he have done a far better job than Ayushman Khurana. Ayushmann and Jaideep have been seen working extremely hard in every scene, but excessive formulas can drown the movie. The one who goes to London in a jiffy, the one who shoots even the policemen of London without any hesitation, the one who slaps the inspector and makes them take off their clothes is just a corporator, this too does not fit. Yes, the director did not miss commenting on Judiciary, ‘Judicial is the elder daughter-in-law of the house, what will be her responsibility’. 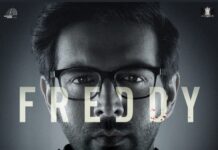