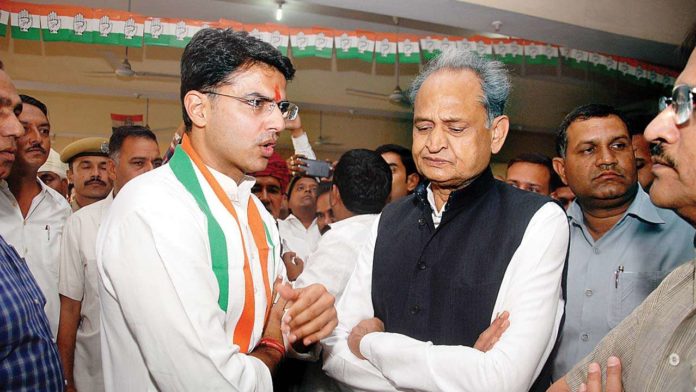 Rajasthan’s Mewar region is reflective of the infighting between the opposition party. The factionalism in the party is also starting to reap its darker side. It has always been believed that Mewar sets the tone for the state elections; the party which wins Mewar wins the state is a common notion. This time the infighting in Congress owing to an unknown Chief Minister face may prove to be a big hurdle for the Congress in Mewar.

A media agency took the task of understanding the public sentiments and the common feeling is that a faceless Congress will not get votes. Here is what a 52-year-old compounder from Bhilwara had to say about the Rajasthan elections: “Congress has too many faces and it does not send a good message. Even if we vote for them, we do not know who will become the chief minister. We want Congress to come back to power because we are unhappy with the current government but the problem is it cannot keep its (own) house in order. Its own leaders are fighting behind the scenes and one is trying to pull down another,” said Shankar Lal Payak.

There are sure many differences between Ashok Gehlot and Sachin Pilot; the hostility is weaving a creepy behind-the-scenes-story for the Congress. Former Chief Minister Ashok Gehlot said that there were a total of seven CM aspirants, including former Union ministers C.P. Joshi, Girija Vyas and Lalchand Kataria, Lok Sabha MP Raghu Sharma and leader of legislative party Rameshwar Dudi.

Congress is apparently making sluggish moves in Rajasthan; it delayed its manifesto release date; it was so confused before releasing its candidate list. However, all is done now, but its time to note what the old party is planning their campaign. Amidst the confusion, it is likely for Congress to form its government again. What do you think?