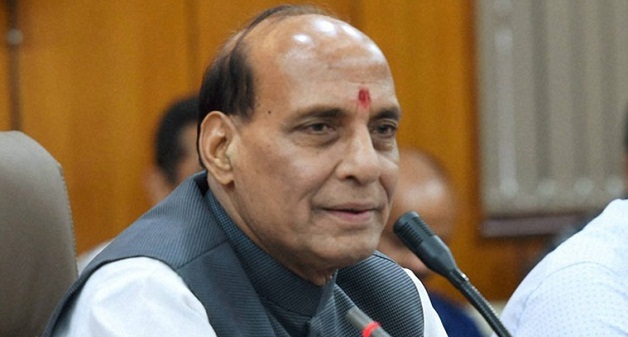 After Rajasthan CM’s Visit to Jaiselmer, Rajnath Singh Minister of Home Affairs, Observed Strict Measures to Counter Pak’s Insolence. Are We Prepared to Retort Against Pak?

In the wake of consistent infiltration, terrorism and ceasefire violations by Pakistan, BJP Government hit back in a ‘no nonsense’ tone this time.  Yesterday, CM Vasundhara Raje offered her prayers at the famous Tanot Mata Mandir to gear up spiritual defence against Pak. And today, Union Home Minister Rajnath Singh visited ‘Golden City’ for a top-secret 2-day meeting with military forces, amidst heightened tension along the border. Seeing these elaborate preparations, it seems the Government will leave no stone unturned in terms of national security this time.

Following Pakistan’s failed attempt to cross border from PoK on Thursday, Union Home Minister Rajnath Singh arrived in Jaiselmer with the intention of monitoring security measures. Today, he chaired a meeting with BSF officials, CMs, home secretaries, deputy generals of police and state home ministers of Jammu and Kashmir, Rajasthan, Punjab and Gujarat. Moreover, he’ll be visiting Barmer and other neighbouring districts to meet with the soldiers appointed there.

Quick Outcomes of This Meeting

Home Minister was quick to take major decisions regarding this matter. As per the outcomes of this meeting,

Home Minister appreciated the Indian Armed Forces for their dedication and valour. According to Rajnath, ‘The way a farmer guards his farms, Indian soldiers are vigilant and guarding the borders.‘ The Ministry of Home Affairs expressed their gratitude towards soldiers and promised to safeguard the nation against threats.

Firm steps and decisions like this are going to resolve terrorism issue for India. Seeing all these preparations, it’s safe to say that India is prepared to wreck mayhem on those, who threaten its peace. Not just empty words, it’s tough action now; India will strike back!